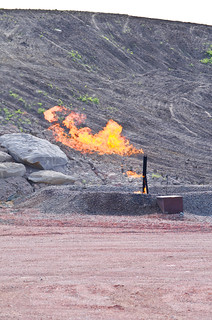 Once again humanity faces a threat to its continued existence. The first, the atomic bomb, remains in the jug but may escape at any time. Unfortunately, global warming has no jug to contain it. Under present practices, global warming will occur sooner than anyone predicts. Once the critical temperature arises, humanity will no longer find it possible to adapt to the resulting environment. Millions of years of experience in adaptation will no longer apply. We will become refugees in our own land--our genome alienated from the new environment.

There is no credible controversy in the scientific community about the consequences. Unfortunately, instead of the facts we get a media game that obfuscates any conclusions. Everything is in dispute. Intellectual honesty remains impossible when determining what the facts mean remains out of reach. Agendas rule instead. The agenda for those who wish to continue burning fuel that contaminates everything, and makes them rich, includes any means of denying global warming.

Without intellectual honesty, we cannot resolve conflicting agendas and opinions. Means of validating constructs [like E= MC2] that describe reality where it cannot otherwise be seen lie at the center of the science now under attack by agendas that cannot survive intellectual honesty. The billion dollar campaign to discredit global warming attacks the means of vetting discoveries that will help us adapt to a sustainable environment. Ignoring earth science is the most dangerous game anyone can play.

Intellectual honesty requires an agenda so inclusive that only the sanctity of life can serve as its guiding light. The global-warming debate shows no signs of applying that bottom line. Mostly, the arguments rely on magic thinking like the coming of new technologies that will do huge amounts of work with little side-effects in spite of the laws of physics and chemistry that govern the production of energy.

We have been using up the earth and ignoring the bill. Nature does not hand out free lunches; governments provide subsidies that hide the fact. New technologies praised as solutions are more likely to make the problem worse. That hypocrisy, ignoring nature's rules when it supports an argument, is one failure of intellectual honesty. These failures appear in all walks of life. During the life of my law practice of over 30 years I witnessed an increasing tendency for the trier of fact to rely on something other than intellectual honesty. Opinions get the facts right or the law right or both but come up with a wrong result, which does not follow from the facts or the law. Some agenda pre-empted the way conclusions were once drawn. All the math and experimentation science relies upon is worth nothing if the conclusions do not match the findings or the findings do not match the facts.

The unfortunate consequence of that discourse makes it easy to deny what someone does not want to hear. I have some difficulty with the denial of global warming on the most basic level. The ability of carbon deposits to generate heat is not in question, nor is the fact that we are dumping millions of tons of it in the air. One and one makes two.

People have tried many means of overcoming bias. The scientific method has contributed much to that effort. Some see pragmatism as an answer. The President sees himself as a pragmatist, not an idealist or a man of faith. Pragmatism has its uses but in the absence of the sacred it can abandon the all important sense of proportion and adopt agendas that serve the status quo. Compromises that sacrifice one life support for another (like clean air at the expense of clean water) will not save the planet any more than bombing accused terrorists will end terrorism. Terrorists may be hard to track down but bombing their friends and families to get them makes no friends and puts the whole operation in a morally reprehensible light--safety at the expense of justice.

I practiced law for 30 years as a city attorney. I taught elementary school before that. I became concerned with the many adaptations to our environment that I could not believe could be sustained. How could so many rational people adopt clearly (more...)
Related Topic(s): Change; Democracy; Energy; Government; Markets; Money; Oil; Oil; Science; Time; (more...) Time, Add Tags  (less...)
Add to My Group(s)
Go To Commenting
The views expressed herein are the sole responsibility of the author and do not necessarily reflect those of this website or its editors.

Work Does Not Work Anymore

The Choice: Socialism or Fascism

The Biology of Evil

The Triumph of Engineering and the Failure of Capitalism -- Will It Produce Socialism of Feudalism?

White Supremacy Is What It is All About