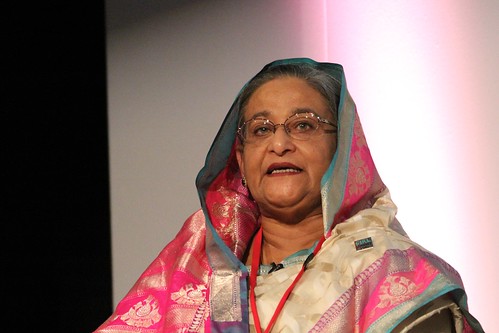 A prominent newspaper of Bangladesh has reported that Prime Minister Sheikh Hasina did not meet India's envoy despite repeated requests for a meeting in the last four months.

Bhorer Kagoj, a prominent daily, also said that all Indian projects have slowed down since the re-election of Prime Minister Hasina in 2019 with Chinese infrastructure projects receiving more support from Dhaka.

"Despite India's concern, Bangladesh has given the contract of building an airport terminal in Sylhet to a Chinese company. Indian High Commissioner Riva Ganguly Das tried for four months to get an appointment with the Prime Minister of Bangladesh but did not get it. Bangladesh has not even sent a note of appreciation to India in response to Indian assistance for the COVID-19 pandemic", said the newspaper's editor Shyamal Dutta in an article on the recent tilt of Dhaka towards Pakistan and China.

Beijing Urban Construction Group (BUCG) has received the contract for building a new terminal in MAG Osmania Airport of Sylhet that borders India's northeastern region and is, therefore, considered a sensitive area for New Delhi.

As Sino-Indian tensions have become the axis upon which the regional geopolitical landscape is evolving, New Delhi's relationship with Dhaka appears vulnerable, according Shiv Nalapat of Times Now News.

While New Delhi's Bangladesh policy has been fragmented, Beijing has, in recent years, managed to deepen its relationship with Dhaka, as it seeks to increase its sphere of influence in the region

The timing of the China-Bangladesh deal that would see Beijing grant duty free access to 97 per cent of Bangladeshi products has also caused consternation for New Delhi, in light of the bloody confrontation that ensued at Galwan Valley in mid-June, Nalpat said.

India lost its place as Bangladesh's largest trading partner to China in 2015, and Beijing has, reportedly, committed over $24 billion worth of investments into Bangladesh following the signing of 27 agreements during Chinese President Xi Jinping's visit to Dhaka in 2016.

It is safe to say that Bangladesh is tilting toward China. Recently, Beijing granted duty free access to 97 percent of Bangladeshi products effective from July 1. Bangladesh has also recently requested from China an infrastructure fund worth $64 billion. This request was made through the Investment Cooperation Working Group with China, which was established last year.

China has become Bangladesh's top source for arms imports; and Dhaka likewise is China's second-largest arms export destination in the world, behind Pakistan. Bangladesh accounts for 20 percent of all Chinese arms sales. Beijing has provided Dhaka with five maritime patrol vessels, two submarines, 16 fighter jets, and 44 tanks, as well as anti-ship and surface-to-air missiles. In 2017 the Bangladesh Navy took delivery of two Chinese submarines at a minimum price.

In addition, China has offered help and much-needed medical supplies to Bangladesh in order to deal with the COVID-19 pandemic on the condition that Bangladesh will agree to form sister city alliances with Chinese cities. These alliances are considered a tool to develop people-to-people relations across borders by promoting commercial and cultural relationships. China has also stated that Dhaka will be a priority should Chinese researchers develop a vaccine against the new coronavirus.

Historically Bangladesh has more cultural and societal links with India who helped in its creation in 1971. However, India's hegemonic posture and coercive tactics created deep resentment among ordinary Bangladeshis, especially when contrasted with China's model of noninterference in domestic affairs coupled with lavish spending, says Anu Anwar, an Affiliate Scholar at East-West Center, and a Research Fellow at the Asia-Pacific Center for Security Studies (APCSS), Hawaii.

New Delhi has reason to be concerned over the political clout that Beijing may now wield within the power corridors of Dhaka, Nalapat says adding:

The timing of the China-Bangladesh deal that would see Beijing grant duty free access to 97 per cent of Bangladeshi products has also caused consternation for New Delhi, in light of the bloody confrontation that ensued at Galwan Valley in mid-June. Bangladesh's silence on the matter has also not gone unnoticed.

Within the context of Beijing's aggressive maneuvering in recent months from the border dispute in Eastern Ladakh to continued military expeditions in the South China Sea, along with the souring of tensions between New Delhi and Kathmandu, India must ensure that it does not also allow a deterioration in its equation with Dhaka, Nalapat concluded.