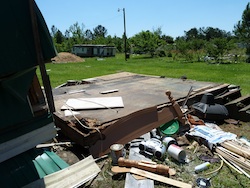 (Image by Unknown Owner)   Details   DMCA
Crossposted from Bridge The Gulf . Two days after a tornado tore through Eupora, Mississippi, Cherraye Oats set out with her daughter Courtney to get tarps for their neighbors' battered homes.  Oats' house was spared, but the mobile home 20-year-old Courtney rented was destroyed.  "If my daughter had not spent the night with us, we probably would have been burying her."

The nearest disaster response center was several miles away at the fire station in Cumberland, a predominantly white town, and no one was bringing supplies out to their low-income African American and Latino community.

"The Black families were kind of just left alone out there," recalls Oats, who is a Registered Nurse and a local organizer with the Fannie Lou Hamer Center for Change.

When they arrived at the fire station, a young man started to assist them. But Oats says he was called away by another man, Johnny Alford, who appeared to be working for the Webster County Emergency Management Agency.  She says that next Alford hissed, loud enough for them to overhear, "What do them black rats want?"

Courtney says she wheeled around to face the white man and be sure she was hearing him right, when he repeated it to her face, "You, you black rat -- what are you doing here?"

When Cherraye calmly explained they were there to help neighbors in need, he told her she could take just four tarps, "Cut them in half if you need to" -- the rest were being held for families in Cumberland.[1]

Six months after this run-in with blatant racial discrimination in the tornado relief efforts, Cherraye and Courtney Oats say the recovery process also shows signs of inequality.  "I just feel like low-income and African American families have fallen through the cracks," says Cherraye.

Courtney, now 21, is still staying with her mother while she looks for a place to live. After weeks of frustrating back and forth with the Federal Emergency Management Agency (FEMA), the agency still has not approved her application for temporary rental assistance.  Courtney begins to cry as she talks about her growing exasperation,

"I just want people to listen to us.  I'm still trying to get back on my feet.  I know my mother loves me, but" she has a house full of people.  I feel like a strain" Every time I call [FEMA], they say "you need to do this, this, and this.'  And then I do it, and nothing is right."
Damage in Eupora, Mississippi.  Photo by Cherraye Oats.

The tornado that destroyed Courtney Oats' home was one of 305 that struck the U.S. south about six months ago.  The outbreak, from April 25th to 28th 2011, killed more than 300 people, and made thousands homeless.  In Alabama, the hardest-hit state, FEMA says 88,000 people registered for assistance.

"People are slowly recovering and rebuilding," says John Zippert, director of the Federation of Southern Cooperatives.  From its base in southwest Alabama, the Federation has been supporting tornado survivors in nearby rural counties (like Greene, Hale, Sumter, and Pickens).  Unlike Webster County (where the Oats family lives) which is 79% white, these counties are in the southern "Black Belt" and are between 40-80% African American.

Ethel Giles, who also works with the Federation, says, "To our folks, as far as I know, I think [FEMA] did good."  She and Zippert say they have not seen racial discrimination in their area.  Even so, they say resources are falling short.

Giles points to Ms. Thennie Jackson, a resident of Tishabee road in Greene County, as an example of recovery.  A tornado caved in half of Ms. Jackson's roof, as she and her family prayed inside and waited for it to pass.  After weeks of appeals, Ms. Jackson has fortunately gotten funds from FEMA to repair her home.  But now she faces a new challenge -- she has to replace all of her destroyed furniture and appliances, and a washing machine costs a whole month's income.

Back in Webster County, Mississippi, Cherraye Oats says about 20 families have reached out to her looking for assistance because they are still displaced.  Some are living in cars or staying on their families' couches. "A lot of people got assistance," she says, "But [it] is really not enough to get them back on their feet." 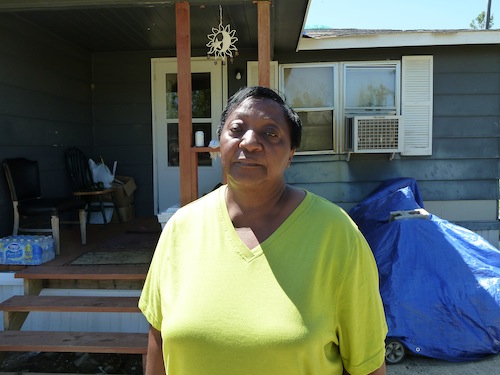 (Image by Unknown Owner)   Details   DMCA
Ms. Jackson in May 2011, outside of her home on Tishabee road.  She had been spending sleepless nights in her daughter's home and spending days on her porch, "the sturdiest place in the house."  Photo by Ada McMahon.

The tornadoes hit a region -- the Black Belt specifically and the South generally -- where many communities were already struggling with entrenched poverty, racism, poor schooling and other social and racial inequities that date back to the slavery era.

Even a recovery absent of outright discrimination can exacerbate these injustices, as it is poor communities who have the hardest time making up the gap between government assistance and the true cost of the damage. -- --

"The storm added more variables to an already critical situation," says Glenda Williams, a Tuscaloosa-based community organizer with the Southwest Alabama Association of Rural and Minority Women.  "What are people going to do when winter comes?" I hope that this storm does not create another level of impoverished people that are not in the loop, pushing people over the edge""  Williams says that in rural areas around Tuscaloosa, many are still homeless and staying with family or in their cars.

Monique Harden, a New Orleans-based attorney with Advocates for Environmental Human Rights, also worries about long term impacts; "The more prolonged a family's displacement is, the more entrenched it will be that the children, and the children of those children, will not see the same level of progress as the parents.  You can have this downward spiral...

ADA McMAHON is an independent writer and videographer currently based in New Orleans, Louisiana. She is a Media Fellow with Bridge the Gulf, a media project led by Gulf Coast communities working toward justice and sustainability. (more...)
Related Topic(s): Alabama; Climate Change; Climate Change; Disaster Relief Agencies; Disaster Responses Planning; Disasters; FEMA; Hate-Racism-Bigotry; Mississippi; Mitt Romney; (more...) Social Justice; Tornado Outbreak, Add Tags  (less...)
Add to My Group(s)
Go To Commenting
The views expressed herein are the sole responsibility of the author and do not necessarily reflect those of this website or its editors.