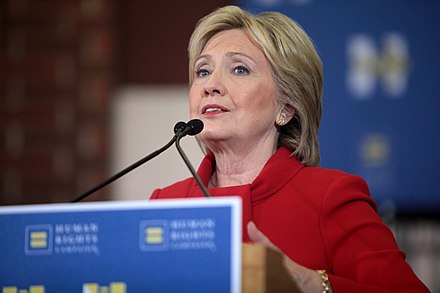 Hillary Clinton warned that American elections are under escalating assault from domestic and foreign forces threatening the right to vote on Tuesday in a far-ranging speech delivered at the In Defense of Democracy conference in Washington, D.C. (Video of her full speech is embedded below.)

"I really believe we are at a moment of national soul-searching," said the 2016 Democratic Party presidential candidate and ex-secretary of state at a forum on civic participation organized by the American Federation of Teachers. "We stand at a crossroads of our own, a crisis in democracy. Racist and white supremacist views are lifted up in the media and in the White House. Hard-fought-for civil rights are being stripped back. The rule of law is being undermined. The norms and institutions that provide the foundation of our democracy are under assault."

In her speech, Clinton detailed how partisan Republicans have hijacked the rules that govern electoral participation to seize and hold power in a manner that echoes infamous authoritarian rulers. She pointed to a catalog of voter suppression laws newly resurrected in states dominated by Republicans. The impact of those tactics, she said, is magnified by online partisan propaganda and foreign intervention.

"We are witnessing a deliberate and ongoing effort to undermine the integrity of our elections, and to silence the voices of millions of Americans, particularly young people, the elderly, women, and people of color," said Clinton. "And this isn't just about 2016 or even 2018. It's about 2019, 2020, and every election after that. Because as the teachers in this room know so well, if we don't learn the lessons of the past, we are doomed to repeat history."

Clinton called out the tactics used by Republican governors and legislatures, from stricter voter ID laws, voter roll purges, fewer voting options and backlogs in processing voter registrations to poor election administration. The result is to disenfranchise hundreds of thousands of voters in Wisconsin, Michigan, and many other states.

Such tactics, she said, "were literally made up for the purpose of preventing certain people from actually being able to cast a vote that would be counted. We saw fewer voting places, long lines, and malfunctioning equipment, again, in certain places [where blue-leaning voters predominated]. ... That is no accident. It is in service to their larger political goals of obtaining and keeping power."

"Just think about what happened last week," she went on, "when President Trump went to North Carolina on the eve of a special election -- an election that had to be redone as a direct result of Republican cheating -- he didn't condemn that, of course. Instead, he claimed again that [pro-Clinton] voter fraud was rampant in 2016."

"Sometimes it's hard to process all of this because he lies so much. But let that sink in," Clinton said. "The president of the United States is lying to Americans to delegitimize the democratic process. Yes, of course, it's abhorrent. It's delusional. But it's also strategic. And that should bother every one of us."

Clinton spoke most fervently about the advice she is giving to Democratic presidential candidates. After answering their questions, said Clinton, she would end those conversations by citing four trends that would threaten their candidacies: voter suppression, hacking, fake news, and cybersecurity.

"Let me tell you what I think the biggest obstacle might very well turn out to be," Clinton said, recounting her talks with 2020 Democratic hopefuls. "You can run the best campaign. You can have the best plans. You can get the nomination. You can win the popular vote. And you can lose the Electoral College and therefore the election for these four reasons: number one, voter suppression."

"We saw what happened in Georgia, where Stacey Abrams should be governor of that state," she said, referring to the 2018 election. "Registered voters were kept off the rolls. Their registrations just piled up in some back office with no intention to ever enroll them so that they could actually vote."

Next, Clinton cited the Republican-run state of Wisconsin.

Steven Rosenfeld  covers democracy issues for AlterNet. He is a longtime print and broadcast journalist and has reported for National Public Radio, Monitor Radio, Marketplace,  TomPaine.com  and many newspapers. (more...)
Related Topic(s): 2020 Elections; Election Cyber Fraud; Election Fraud; Hillary Clinton; Media Fake News; Republican Voter Suppression; Russia Hacking; Warning, Add Tags
Add to My Group(s)
Go To Commenting
The views expressed herein are the sole responsibility of the author and do not necessarily reflect those of this website or its editors.