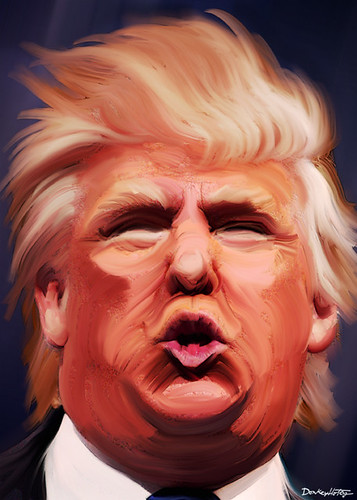 Donald Trump Caricature by DonkeyHotey
(Image by DonkeyHotey from flickr)   Details   DMCA
Fascists and oligarchs within the Republican Party are already beginning preparations to steal the 2024 presidential election. Trump, it turns out, was just a dry run for them.

Their allies in the media are coming together, too. This weekend a Fox & Friends host suggested that Trump shouldn't have to go through the courts to stay President; Republicans in swing state legislatures should simply award their state's electors to him.

Fascists often seem, in the beginning, like nice guys who just want to change the world for the better. They just think that things need to be more orderly and tidy, and that a small number of very smart, very wealthy people need to be in charge to ensure social and political stability. And it always ends the same way: in tragedy.

When Biden won, Republicans in the Michigan, Pennsylvania, Wisconsin and Arizona legislatures refused to direct their electors to vote for Trump. They could have given him four more years; the Constitution is clear on this. But they chose to put America above the GOP. Country over party.

Many are now facing 2022 primary challenges from Trumpy Republicans who were willing to ignore the election results and keep Trump in the White House. Presumably, they will do the same for any Republican with similar fascist tendencies.

In 60 years, the GOP has gone from an electoral strategy of embracing white racists (Nixon), to a strategy of suppressing Democratic votes (Florida 2000), to now a strategy of simply ignoring the results of elections and using legislative power to appoint a president via the Electoral College.

And it's not as if we weren't warned. Back in March, a conservative friend in DC told me Republicans were discussing this option if Trump lost the popular vote in the election. I wrote an OpEd about it that was widely circulated, and I discussed it on my program with Tom Perez and elected Democratic legislators.

Now, even hosts on Fox are openly and enthusiastically embracing the idea of Republicans state legislators simply overruling the votes of their people. Again, this is totally legal and would almost certainly be upheld by the Supreme Court.

It's in the Constitution.

That Constitutional loophole could give the next authoritarian Republicans try to put in the White House the absolute power to ignore the will of the people and take this country down the road so well traveled in the past by Germany, Japan, Italy and Spain.

Today, authoritarian leaders of previously democratic nations have given the next Republican president a more modern blueprint for flipping America into oligarchy and neofascism. From Hungary to The Philippines, Poland, India, and Brazil, democracy is under attack and neofascists have seized power.

When the electoral college was put in the constitution, it could take a week for news to travel from one end of the country to the other. The idea was that electors would go to DC and meet the candidates, and have the discretion to weed out people of "low moral character."

In the Federalist papers, Alexander Hamilton justified the electoral college by writing: "The process of election [by the electoral college]," Hamilton wrote, "affords a moral certainty, that the office of President will never fall to the lot of any man who is not in an eminent degree endowed with the requisite qualifications."

Indeed, while a knave or rogue or traitor may fool enough people to even ascend to the office of mayor of a city or governor of a state, Hamilton believed the Electoral College would ferret out such an incompetent or traitor.

Related Topic(s): Election; Neofascism; Republican; Trump Against Democracy; Trump Bigotry; Trump Corruption Damage, Add Tags
Add to My Group(s)
Go To Commenting
The views expressed herein are the sole responsibility of the author and do not necessarily reflect those of this website or its editors.