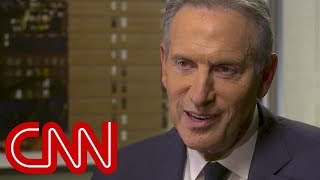 Howard Schultz, the billionaire founder of Starbuck's, the over-priced coffee chain that enthralls some deluded progressives by requiring them to speak a bastardized version of Esperanto when ordering a cup of coffee, believes he should be the president of the United States. As if the country can withstand another callous billionaire born in New York City in the White House, Schultz, who is flogging a book, revealed that he is considering an independent run for the presidency in 2020. Many political observers believe that Schultz, like Green Party candidate Jill Stein in 2016, will siphon votes from Democrats and, thus, ensure a second term for Donald Trump.

Schultz is a faux progressive as witnessed by his belief that Social Security, Medicare, Medicaid, and the veteran's health system are all "entitlements" to be "reformed." Schultz, Trump, Michael Bloomberg, and the three Mar-a-Lago club millionaires who are re-writing the benefits charter of the Department of Veterans AffairsIsaac "Ike" Perlmutter, Bruce Moskowitz, and Marc Shermanall believe that America's social safety net programs somehow take money from their greedy and slimy pockets. Schultz has cloaked himself as a "do-gooder" philanthropist, but his work ethic at Starbuck's is rife with serf-like labor practices. Starbuck's "benefits" package is a ruse. The coffee chain's "baristas" are predominantly part-time employees, who, if they want to participate in the company's health care program, are forced to shell out exorbitant deductions from their measly pay checks and fork out outlandish co-pays.

And, when it comes to buying coffee from some of the world's worst human rights violators and child labor practitioners, Schultz is leading the parade.

It turns out that Starbucks enjoyed a very cozy relationship with the Indonesian military-backed coffee-growing colonists who ran East Timor's large plantations. Protestors highlighted Starbucks' practices in East Timor and other countries during the anti-World Trade Organization protests in Seattle, Starbuck's headquarters, in late November and early December 1999. Starbuck's, a company that prided itself as being progressive, had egg on its face. Its trade practices turned out to be no different from those of Shell, British Petroleum, Nike, Chiquita Brands, and other companies that exploit workers in poor developing nations.

Starbucks had a public relations nightmare on its hands. Starbucks agreed to place "Fair Trade" labels on its products as proof that it was paying coffee farmers a fair price for some of their coffee. The Fair Trade labels are the brainchild of Trans Fair USA, the American branch of a self-regulatory international industry watchdog group that guarantees coffee, tea, chocolate, and banana growers receive a fair price without the markup of middlemen, and that farm laborers work under safe conditions.

Starbucks, as the first company to adopt the Fair Trade labeling scheme, offered its "fair trade" coffee free to passers-by during Washington's World Bank protests. Although Starbucks wanted to get ahead in the public relations contest, fair trade labels are not found on most of the company's products, including those packaged or brewed and served over the counter. In addition, there is no real way of determining how much of Starbucks' business is actually conducted through "fair trade" entities, or if only a small percentage of its coffee purchases are "greenwashed" for public relations reasons.

In Chiapas, the rebellious Mexican state, such a "greenwashing" effort was already operating. In an attempt to drive independent squatters off of the sensitive rain forest land in Montes Azules, where farmers slash and burn for agricultural land, groups such as Conservation International and the World Wildlife Fund, as well as the always suspect U.S. Agency for International Development (USAID), began a campaign to protect the land for the 66 surviving Lacandon Mayan families.

Ernesto Ledesma Arronte of the Center for Political Analysis and Social and Economic Research (CAPISE), based in Chiapas, suspected ulterior motives by the environmental groups. He cited their major offendersStarbucks, Pulsar Group, Chiquita, and Exxonas a reason for caution. He said the companies all had their eyes on Montes Azules's rich resourcescoffee, fruit, oil, and pharmaceutical products. Conservation International denied that the companies had any plans to exploit the rain forest. The Zapatista National Liberation Front said it would fight any attempt to remove any villagers from Montes Azules, once again pitting Starbucks and its agents of influence against the poorest of the poor.

Starbucks' history in East Timor was not a good one. In 1994, the U.S. Agency for International Development (USAID) officially took control of East Timorese coffee plantations from the Indonesian armed forces. One of the Indonesian military bigwigs in on the deal was former Indonesian armed force commander General Benni Murdani, a favorite of the Central Intelligence Agency. Although Murdani was forced to resign as commander in 1993, his influence over East Timor's coffee production remained significant. Operating through a local super-cooperative called the Timor Coffee Project, which acted like a modern-day British East India Company, USAID and the U.S. National Cooperative Business Association (NCBA) administered the coffee plantations and arranged for most of the organically-grown reddish-hued Arabica bean crop to be sold to none other than Starbuck's.

Rather than be caught selling East Timorese coffee at its stores, Starbuck's cleverly re-named the coffee as being from Sulawesi or Sumatra.

NCBA has an interesting international background. It has been active in setting up similar agricultural cooperatives in both Nicaragua and El Salvador, two countries among many where USAID and U.S. intelligence agencies have often worked hand in glove.

Chemonics was also active in the Guatemalan coffee sector under a USAID contract. In East Timor, many of the local officials of the coffee cooperative were not even native Timorese, but migrants from Java and Bali who wanted to turn a quick profit on the backs of underpaid East Timorese farm workers.

The East Timorese plantation workers amounted to nothing more than indentured servants of the U.S. government. Although the Timorese received better wages from the Americans than they got from the Indonesians, USAID and its NCBA contractor negotiated prices and did all marketing on their behalf. And according to one businessman who is familiar with the deal, the salaries that the East Timorese plantation workers received from their U.S.-backed Indonesian overseers amounted to nothing more than "slave wages."

Although the 1994 deal between USAID, NCBA, and the local coffee potentates was advertised as advantageous to the native East Timorese, during the summer of 1995 several coffee workers rioted in the towns Baucau, Emera, and Pante Makasar (in the all-but-forgotten East Timorese exclave of Ambeno Ocussi) over the arbitrary decision by Indonesia to lower coffee prices.