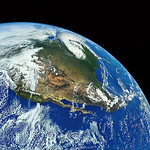 Secularization and Its Disconnections

I claimed, in the first entry of this series, that a meaningful "story" about our kind (about the human saga) is largely missing in contemporary society--"at least in its secular components." That phrase about "secular components" was an acknowledgment that our traditional religions do continue to offer "stories" that, if believed, provide an account of what we are as human beings and, at least in some respects, the meaning of the human saga.

But over recent generations, in the Western world, much of the world of serious thought has split off from the world of traditional religion. For people who feel that intellectual integrity requires that conclusions be based on applying reason and logic to the totality of the evidence -- and for whom beliefs based on received authoritative texts fail to meet that test -- the stories told by the religions of our civilization no longer provide convincing answers.

This process of secularization has left some important empty spaces. An important aspect of such "empty space" is that, to many, the requirements of intellectual responsibility have seemed to block the way toward firm moral beliefs and spiritual conviction.

But I maintain that there is a secular and intellectually responsible way to fill those empty spaces, or at least some of those that matter most.

Most of secular thought, for example, operates from the conclusion that judgments of value are lacking in a solid basis in reality. (You can't get "ought" from "is.") Statements about value, many have felt compelled to conclude, are just matters of opinion, and thus cannot be taken fully seriously as saying things that are "true."

Additionally, according to much of the rational-secular world, there is no meaningful and valid way of speaking of "the sacred."

It has seemed to many that one can EITHER be intellectually responsible (meaning believing only what evidence and reason lead one to believe) OR one can feel hold moral and spiritual truths with full conviction. But not both.

That way of thinking, I maintain, is both dangerous and invalid.

Those "empty spaces"-- left empty by the way secular thought has developed -- have contributed to the peril of our times by interfering with the ability of many good people to connect fully with their moral and spiritual core.

That is a significant loss, as that core is a place from which comes much of the passion required to contain the forces of destruction at work in the world.

(Here's a dangerous combination that might serve as a very approximate description of the heart of the current crisis in the American body politic: while a large component of the church-going part of America, which does believe in such things as "good and evil," has been deceived and manipulated into giving support to a force of destruction; and meanwhile, a large portion of the secular-minded, liberal part of America has proved incapable -- due to its blindness and weakness -- of seeing and combating that force.)

If it is true that the disconnection, among many with a secular worldview, from a moral and spiritual core is part of the reason that destructive forces have gained so much power in our times, it would be hard to over-estimate the importance of this issue.

And if a different and valid path for secular thought were available -- one that demonstrates that there is no need to choose between maintaining intellectual integrity (in rational, scientific terms) and having full commitment to some fundamental moral and spiritual truths-- then that different way of thinking could have an important and beneficial effect on the quality of our civilization.

It is the belief in that different and valid path, and its potentially beneficial effects, that is the motivating force behind this series on "A Better Human Story."

Andy Schmookler, an award-winning author, political commentator, radio talk-show host, and teacher, was the Democratic nominee for Congress from Virginia's 6th District. His new book -- written to have an impact on the central political battle of our time -- is
Related Topic(s): Character And Values; Cosmic Evolution; Evolution; Political Values; Secular; Secular Humanism; Secularism, Add Tags
Add to My Group(s)
Go To Commenting
The views expressed herein are the sole responsibility of the author and do not necessarily reflect those of this website or its editors.