Some in the western media and Iranian exile groups living abroad went wild with criticism and disgust for an incident that happened yesterday at the Paralympics. Discus thrower Mehrdad Karam Zadeh had won the silver and it was time to get his medal. Kate Middleton, the newly wed Duchess and wife of Prince William, was giving the medals out the players followed by a hand shake. It is customary for religious muslims to avoid physical contact with opposite sexes and so the Iranian respectfully placed both his hands on this chest and bowed. In reality, Kate Middleton knew about this custom in advance and was ready and not left with a hand extended.

The Telegraph, an often regular for Iran-bashing, lunched its assault on Iran and Mr. Zadeh. Even though they finally reported in their 8th paragraph that the Duchess knew of this before hand. They released the Palace answer to the whole thing, "The Duchess was informed in advance and was happy to accept his wishes. She considered it an honour to present the medals."

Starting with their headline, "Duchess of Cambridge "snubbed", which they later changed after even the British press took note of their inconsistency. Another newspaper, by the same name, The Telegraph,  a conservative Australian newspaper even started their story with, "The Duchess of Cambridge was apparently snubbed in front of a global audience of millions when an Iranian athlete refused to shake her hand for cultural reasons.

The British Telegraph,  meanwhile had this cover photo with what looks like a surprised Kate Middleton walking away, "snubbed" and a British player going for a hand over his face as in shock and astonishment. 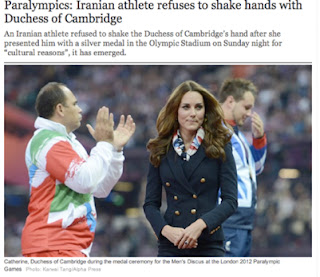 The newspaper then changed the subject and started talking about Iran, its nuclear program, the supposedly negative effects of its hosting of the NAM summit, and the need to stop Iran's nuclear advancement. What these points had to do with a handshake or lack of one for that matter I am not sure.  You can find the text below:

In 2007 relations reached a nadir when the Iranian Revolutionary Guard captured 15 Royal Navy personnel off the Iran-Iraq coast and held them for 13 days.

The Islamic Republic has found itself on the defensive in the past week on its home territory as it hosted the 120-state Non-Aligned Movement conference. Ban Ki-Moon, the UN Secretary General, denounced the regime for its persistent threats to destroy Israel and Holocaust denial, and called on Ayatollahs to co-operate fully with the UN over its nuclear programme.

Yesterday the Israeli Prime Minister, Benjamin Netanyahu, called on the international community to get tougher against Iran, saying that without a "clear red line," Tehran will not halt its nuclear programme.

"Until Iran sees this clear red line and this determination, it will not stop its advancement of the Iranian nuclear programme. Iran must not have a nuclear weapon," he declared.

Unfortunately, stories like these are put out to create an image of an Iran and its people as simply radicals and simply too different from us  to work with.

In reality when one looks at the REAL facts, it does not look like a "snub" or disrespect, or even something that a "global audience of millions" would interpret as something with evil intentions.

Have a look at the video that The Telegraph did not provide and be the judge for yourselves:


This article was posted on The Real Amir Taheri

I am a business consultant by day working to bring Iranian businesses into the international market and in the evenings a journalist. My hope is to show the real Iran to the western world.
Related Topic(s): Anti-iran Propaganda; Iran; War On Iran In 2012, Add Tags
Add to My Group(s)
Go To Commenting
The views expressed herein are the sole responsibility of the author and do not necessarily reflect those of this website or its editors.

Iran And Sanctions - Chess Or Checkers?

Is Iran Being Forced To Retaliate With War?

Sanctions on Iran - Good or bad?

I'm moving to Iran...why are you looking at me like that???