By Richard Eskow and Sean McElwee 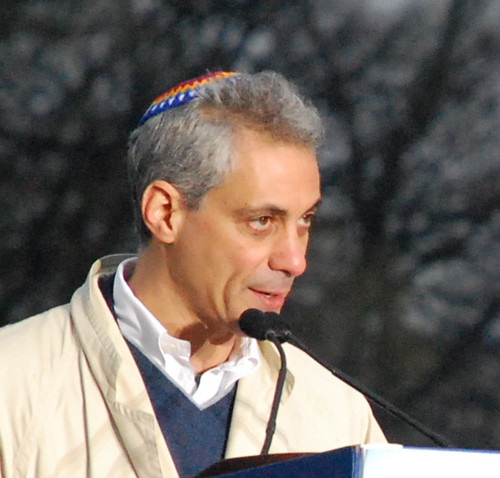 The skies above Washington D.C. are restricted airspace for low-flying aircraft, with one major exception. The inception of a new presidential administration fills the air with trial balloons, as job seekers and administration officials test the public reaction to possible appointments.

One trial balloon has progressives around the country reaching for balloon-popping pins: that of Rahm Emanuel, Barack Obama's White House Chief of Staff and the ex-mayor of Chicago. Axios increased the speculation this weekend when it reported that the president-elect is "strongly considering" Emanuel, who has long battled the left on policies that range from health care to policing, for Secretary of Transportation. But our analysis shows that an appointment for the notoriously abrasive Emanuel should be of even more concern to the new administration and the Democratic Party than it is to the left.

Research at Data for Progress, as well as survey data from other sources, places Emanuel on the wrong side of many critical issues that Democratic voters (and, in many cases, the electorate as a whole) care deeply about. It would be a deeply divisive and unpopular choice, with serious implications for the administration's political and policy future.

As a side note, Emanuel is well-known for his harsh language. As White House Chief of Staff, Emanuel told progressives that they were "f**king retards" for mounting primaries against conservative Democrats. That language insults the Democratic base, which holds strong progressive views. We condemn his choice of words. Oh, we don't mean the "f-bombs," although the abuse reflects a politically untenable attitude toward the progressives that make up the party's base. The ableist language reflects a harmful attitude toward the disability community -- an attitude that would later be reflected in his actions as mayor of Chicago.

More broadly, our review shows that Emanuel's record stands in stark contrast to the values and opinions of the American electorate.

Let's start with the case that represents Emanuel's worst moment in public life: The murder of Lacquan McDonald, a 14-year-old Black child. That video proved that police lied about the killing. When forced to choose between a murdered Black child and the cop who killed him, Rahm directed city attorneys to suppress video evidence. The video was only released after Rahm was safely re-elected mayor. He went on to serve his second term. After its release, the police officer began serving a term, too -- a prison term for second-degree murder.

Chicago Police tactics under Emanuel were like Trump's, and were arguably much worse. Under Emanuel, Chicago police also operated a secretive, so-called "black site" that foreshadowed the Trump Administration's tactics against Black Lives Matter demonstrators.

As journalist Spencer Ackerman reported in 2015, practices at a "nondescript warehouse on Chicago's west side" allegedly included beatings, shackling for prolonged periods, denying attorneys access to their clients, detaining arrestees without recording them in official databases. Ackerman reports that at least one man was found unresponsive in an "interview room" there and later died.

Emanuel's record on policing runs strongly against voter opinion. Our polling shows that 73 percent of likely voters, including two-thirds (67 percent) of Republicans, believe that "the public has a right to know which police officers in the community have records of excessive force, sexual assault, racism, or dishonesty."

More than two-thirds (69 percent) of likely voters, including 63 percent of Republicans, also support "allowing people to ... use public records requests to learn whether police officers in the community have records of excessive force, sexual assault, racism, or dishonesty." Emanuel's record on policing clashes sharply with this public consensus on police violence.

Related Topic(s): Biden Endorsement; Climate; Democrats; Issues; Mayor; Politics; Racism; Rahm Emanuel; Schools, Add Tags
Add to My Group(s)
Go To Commenting
The views expressed herein are the sole responsibility of the author and do not necessarily reflect those of this website or its editors.