Trump has become infamous for his outlandish statements. His reasoning is batty. And how can we even begin to describe the sheer volume of his proven to be false statements. He is the single greatest promoter of Fake News. Ever.

And, most importantly, his intent is precisely to anger people -- so he can manipulate them. And what is his favorite way to get people angry? Scapegoating non-white people using loathsome, outrageous falsehoods. He divides people according to their racial, ethnic and religious identity and sets them against each other. He's the Divider-in-Chief.

The fake stories he uses (which he gets from the right-wing/alt-right/white-racist media) to slander non-whites aren't just false. They are monumentally false.

He started this last campaign by repeating the right-wing fake news story that Mexico deliberately sends it's worst criminals into our country. Politifact (as well as other fact-checkers) did a well researched fact-check and rated the claim "Pants on Fire."

Despite these facts, Trump not only wants you to believe his fake news story about criminal Mexicans, he wants you to think that they are after you white people. He has paraded out crime victims of illegal immigrants who just happen to be mostly white. But it is a well known fact that the vast majority of crimes committed by all racial/ethnic groups are committed against those same groups because most crime victims know their attacker. As Politifact stated, "these trends have been observed for decades."

You'd think that Trump, an avid news watcher, would know this. But then he saw a fake news site that reported outrageously false Black on White murder statistics which exaggerated the percentage of Black killers by a factor of 5.4 times. The site was traced to some neo-Nazi scumbag who wrote "Should have listened to the Austrian chap with the little mustache." Like all the other times Trump came across a right-wing/alt-right/racist-right fake news story, he bought it hook, line and sinker then promoted it like it had his name on it.

Interestingly, he re-tweeted this gem the day after a black activist was kicked and punched by supporters at a Trump rally in Alabama. Trump said "maybe he should have been roughed up, because it was absolutely disgusting what he was doing." (The man was shouting "Black lives matter.") So it looks like Trump was looking for stronger justification for the assault... see what these black thugs are like? They all want to kill you!

Then we have the infamous fake story that "thousands and thousands" of Muslims in New Jersey celebrated the 9/11 attack as the world Trade Center came down. Again, a falsehood of monumental proportions that had been going around the right-wing/alt-right/racist-right fake news media for years. Trump was called out on it immediately because of its obvious falsity. But the right-wing/alt-right/racist-right media came to Trump's defense with "proof" that this was true. They found several reports of uncorroborated allegations of small groups of people celebrating. Police investigators took no action. Trump supporters called the radio stations swearing they saw small groups of Muslims celebrating, too. See? Trump was right! The only thing is, even if we accept these unverified allegations, Trump and his supporters are still short by a factor of "thousands and thousands."

How many is "thousands and thousands" anyway? I've asked several people their opinion because even Trump's critics were low balling that number. Politifact generously assumed that Trump meant only two thousand. They printed this graph to illustrate how that number compared with the most credible report they could find -- eight men celebrating on a rooftop: 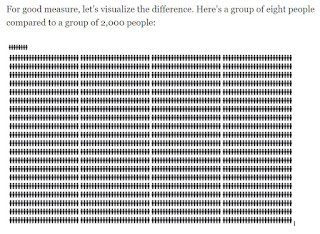 But Trump said "Thousands AND thousands". Other people suggested that number should be ten thousand or twenty thousand or fifty thousand or even more. Well I heard Trump himself tell us how many "thousand and thousands" are. Remember when he was complaining that the International climate agreement required participating countries to contribute a total of 100 billion dollars? He later referred to that number (100 billion) as "billions and billions and billions." So, simple arithmetic says he meant 66 thousand Muslims celebrated. And he saw it on TV.

I read a Breitbart article that defended Trump. The writer was attacking the Washington Post fact checker for giving Trump four Pinocchios for that whopper. But a Washington Post article from back then was found about allegations of a "tailgate style party" on an apartment rooftop which the fact checker failed to mention. So, sure Trump had "exaggerated" but that fact checker was a liar! The Breitbart writer then engaged in some interesting logic that unintentionally exposed the true nature of Trump's monstrous lie. He said, yeah, so Trump exaggerated somewhat but those "dozens" of celebrators represented many more Muslims who felt just like them but didn't actually come out to celebrate.

He had no real proof of even "dozens" of celebrators and even less proof that an exponential number of Muslims felt the same way. But if Trump wants his supporters to believe that the actual number was indeed "thousands and thousands" as he continued to insist even in the face of common sense and the lack of evidence, what does he want them to think about the Muslim American population in general? By your own logic, Mr Breitbart writer, Trump wants them to think that practically all the Muslims in this country want all of us non Muslims to die. That would justify the ban, the registry of Muslims and the crackdown on mosques he wants.

If you google "Obama most divisive President in history" you will find 388,000 results with countless Republicans and conservatives offering this opinion. According to them, race is the issue Obama is most divisive on. By their own measure, do you think Trump has Obama beat? Do you think they would admit it? Should we be referring to Trump as The Divider-in-Chief from now on?

I was born in 1955, right smack dab in the middle of the baby boom. Brought up as a Catholic and educated in Catholic schools, I became an agnostic by the age of 12. While rejecting supernatural explanations of the unknown, the moral lessons of the (more...)
Related Topic(s): Alt-right; Conservatives; Evidence; Hypocrisy; Ku Klux Klan; Media Fake News; Muslim; Republican, Add Tags
Add to My Group(s)
Go To Commenting
The views expressed herein are the sole responsibility of the author and do not necessarily reflect those of this website or its editors.