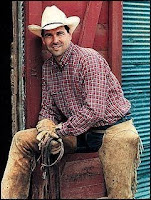 (Image by Unknown Owner)   Details   DMCA
Texas Governor Rick Perry has touted the state's seemingly low tax rate and "right to work" status as top reasons why employers are bringing jobs to Texas, and he is correct. The most common forms of rebate available to relocating businesses are tax abatements. Big corporations, the theory goes, are lured here by no state tax and a negligible property tax rate (after incentives).
Here's another piece of the puzzle: Texas is one of a handful of states that doesn't use sales records to assess property tax values on either residential or commercial property. As a result, commercial real estate is most grossly undervalued on the most valuable pieces of property in the State.  For instance, it is estimated, based on actual sales records, that average downtown Austin commercial property tax assessments are between 30-35% under-appraised.  That is a huge chunk of tax for which state property tycoons like Harry Wittington are off the hook.
There's little wonder why Texas is facing one of the worst budget deficits in the nation. But that budget deficit, as bad as it is, doesn't get much attention in the national media because a) many other states are in similar (though less dire) situations, and b) it doesn't fit the media's narrative of Texas being Ronald Reagan's utopia realized. Praise Jebus we're not yet to the point where we've had to start selling beer on Sunday morning, or opening up a godforsaken Casino, but evidently we are to the point where we're turning existing highways into toll roads, closing schools and firing our public teachers, already amongst the worst paid in the country.
What do other conservative Governors see when they look at Rick Perry? Do they see a competing Governor using cheap tactics to bring down the collective wages, rights and quality of life of a nation? No. Do they see a leech, sucking their employers away with unfair and unsustainable gimmicks? No. Do they see a polluter, who is fast-tracking old-technology coal-plants and ignoring the very EPA regulations with which they have to comply?
No. They see a role model.  They see a four-termer who can brag about job growth. So what if 90% of the jobs are low-wage and so what if the jobs are purchased through tax abatements and Perry's "rainy-day"-financed "Enterprise Fund"? Other Governor's don't see a disenfranchised populace or a polluted atmosphere. They see results.  I guess when you're Governor, it's a "game" like everything else in today's shell economy.
Just as NAFTA and free trade with China and India have sucked wealth and jobs from the United States as a whole, Rick Perry's cheap stunts are sucking wealth and jobs from the rest of the nation.  And unlike the world economy, there is no arguing this is a zero sum game, where there are defined winners and losers.  Scott Walker and Rick Perry are determined to be "winners" in what they see as a political "game"; also known to real people as "real life".
Are you gonna let these "playas" keep playing with us?
Represent this Saturday.

Polemicist from Austin, Texas. Ready to reprogram your thinking.
Related Topic(s): Governors; Rick Perry; Union Busting, Add Tags
Add to My Group(s)
Go To Commenting
The views expressed herein are the sole responsibility of the author and do not necessarily reflect those of this website or its editors.

America in Decline: the Real-World Costs of Conservative Ideology

How Rick Perry is Screwing America