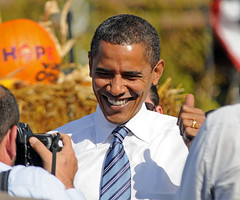 US President Barack Obama suffered a painful defeat in Massachusetts. With mid-term elections looming, it means that Obama will have to fundamentally re-think his political course. German commentators say it is the end of hope.

President Obama and his Administration have only recently understood the misguided approach of completely misleading the public on campaign promises with slick programs to fool the American people.

From creating a larger surge in Afghanistan, preparing for a long term occupation in Iraq (even though there are promises of troop withdrawals, the US will be there for years to come), expanding wars into Pakistan and Yemen, giving trillions more to the banksters, preparing to turn over all financial regulations to the pirates at the Fed, intentionally creating a privatized healthcare plan to make the insurance companies richer, pushing for greater privatization (corporatization) in schools, protecting the Telephone Companies and those that Spy on the American people, protecting the Torturers, a lack of a real economic program to create jobs, and the list goes on and on.

So now there is a plan to tax the banksters for their crude, rude, and greedy behavior towards the American people. That is a populist message that may be too little, too late.

There was an opportunity to implement the hope into real change, but that is gone now. Indeed the Obama Administration never planned on implementing real change but instead created a smokescreen of change while continuing business as usual.

President Obama and his Administration has only recently understood the misguided approach of completely misleading the public on campaign promises with slick programs to fool the American people.

But the American people, like the people of Massachusetts, have had enough. With real unemployment reaching 20%, with record numbers of people on food stamps, with record foreclosures, with record homelessness, with record number of bank closings, and with a record of real economic disaster, the times call for a real structural change of the economy and New Deal Programs to avert disaster.

Instead President Obama implemented a near NeoCon strategy on the economy and on Foreign policy hoping that it would be good enough to fool Americans and still richly feed the Military Industrial Complex.

The Obama strategy of trying to fool the fools with more of the same is not working. But in reality under our present system, President Obama or any American President has little choice but to feed the Military Industrial beast at the expense of the American people. The last President to really try something different was assassinated in Dallas.

The American economic system and the real Power Structure has to be changed. Until the American people are willing to move beyond the fake Republicrat System set up by the Financial Elite that run and control the country, it will always be business as usual.

President Obama, or any American President under our present system, can only kill Hope with the illusion of Change. Sadly, that is the best that we can hope for.

Related Topic(s): Bankster; Economy; Hope Hopefulness; Illusion; Jobs; Obama Administration; Obama Effect; Obamacare; Power; Strategy, Add Tags
Add to My Group(s)
Go To Commenting
The views expressed herein are the sole responsibility of the author and do not necessarily reflect those of this website or its editors.