A Department of Homeland Security center distributed a counter-terrorism bulletin to law enforcement warning about an online petition on the popular advocacy website Change.org.

The bulletin doesn't warn of any impeding violence or terrorist attacks. It begins: "A petition has been added to the Change.org website"" It goes on to say that "outrage has been expressed" as a result of the petition.

Olson, a Wildlife Services employee, posted photos on his Facebook page and hunting websites showing his dogs mauling trapped coyotes, bobcats, and raccoons. The Sacramento Bee and the Missoula Independent reported on the photos. A federal investigation determined that Olson had done nothing wrong, and that, wildlife advocates say, is the problem. Captive animals are routinely tortured by government employees for fun on the job. Gary Strader, a former trapper for the USDA, said: "It always was and always will be controversial. It has never been addressed by the higher-ups. They know it happens on a regular basis."

The Homeland Security bulletin warns that "the attention this petition has received may bring the attention of the more extreme animal rights activists to Wyoming." It cites no threats, property destruction, violence, or any other crime. 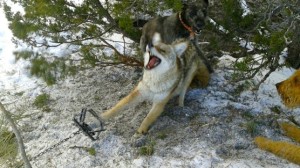 The Sacramento Bee published a three-part series last year that meticulously documented animal abuse within the agency: "Since 2000, its employees have killed nearly a million coyotes, mostly in the West. They have destroyed millions of birds, from nonnative starlings to migratory shorebirds, along with a colorful menagerie of more than 300 other species, including black bears, beavers, porcupines, river otters, mountain lions and wolves."

Republican Rep. John Campbell told FoxNews.com: "This agency has become an outlet for people to abuse animals for no particular reason."

The bulletin was distributed by the Wyoming Criminal Intelligence Analysis Center, which is a Department of Homeland Security "fusion center." This is far from the first time that lawful, First Amendment activity has been included in counter-terrorism bulletins produced by fusion centers.

The Project Coyote petition currently has more than 60,000 signatures, and   can be signed here .

Will Potter is an award-winning reporter who focuses on how lawmakers and corporations have labeled animal rights and environmental activists as "eco-terrorists." Will has written for publications including The Chicago Tribune, The Dallas Morning News and Legal Affairs, and has testified (more...)
Related Topic(s): Dept Of Homeland Security; Fusion Centers; Petition, Add Tags
Add to My Group(s)
Go To Commenting
The views expressed herein are the sole responsibility of the author and do not necessarily reflect those of this website or its editors.