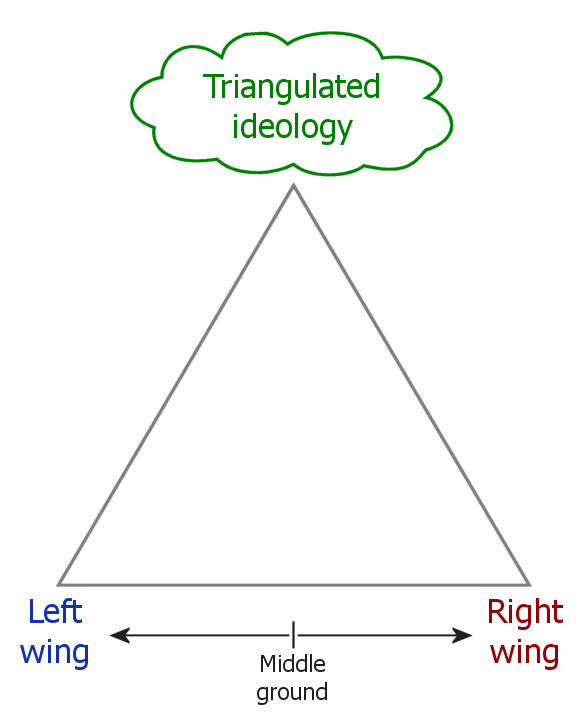 At the height of the bribery scandal involving the Chicago White Sox baseball team in 1919 heard around the country was the phrase "Say it ain't so, Joe." The reference was to one "Shoeless Joe" Jackson, a Chicago ballplayer of limited education who had gotten caught up in the scandal, apparently without realizing what he had gotten into.

Shoeless Joe, educated or no, was one of the great players of the age and many a baseball fan -- of the White Sox or not -- rooted for him. The incident that supposedly gave rise to the phrase cited above apparently never took place, but it has remained in the lingo of many a baseball fan, including myself, ever since.

And now we come to Hillary Clinton and something that she really said, recently. Speaking about a possible political future, she said that she's "committing herself to bridging the gap of political partisanship." Oh boy! This is where we came in with the Clintons: finding the mythical middle ground when one does not exist. It was the hallmark of Bill Clinton's Presidency, but it was actually much worse than it looks on paper.

Because for Bill, and Hillary back then too -- as well as now -- much more often than not "reaching across the aisle" really meant adopting Republican polices, but just coloring them up a bit. Consider the Bill Clinton Legacy, which can be found here.

It included repeal of Glass-Steagall, welfare deform, "three strikes and you're out," intensifying the "drug war," going to war without Congressional authorization (against Serbia, in case you have forgotten), NAFTA, the WTO and in particular easing the export of capital, and eliminating the Fairness Doctrine. All the result of the Clintons' "reaching out" to the other side.

On one level, it's just unbelievable that Clinton would be wanting to "reach out" to that other side that, at both the leadership (see the cheerleading Michael Flynn and Rudy Giuliani) and crowd levels reveled in screaming "lock her up!" But once a right-wing Democrat whose husband was once upon a time the leader of the leading right-wing Democrat organization, the Democratic Leadership Council, always a right-wing Democrat. And right-wing Democrats always just happen to have a lot in common with the so-called "Third Wave/No Labels" folks, who of course in the wake of HRC's defeat are rearing their ugly heads again. But let's just look at some of the issues, on which, as it happens, there is no "middle ground."

There is no "middle ground" on the matter of global warming and what is causing it. One either accepts the scientific evidence or one doesn't. If one accepts the evidence, there is certainly much worthy debate on how to go about dealing with the problem, but the evidence-deniers are not part of that discussion. That the Trumpites are not only shutting down the climate change-control programs, they are even eliminating the evidence-gathering functions of the Federal government certainly shows that there is no "middle ground" on this one.

"Intelligent Design," is bound to make a comeback into the public arena now that the Department of Education is in the hands of someone who wants government subsidies for religious schools and promotes "home schooling," almost all of which is undertaken by religious rightists who don't want their children's minds sullied by such matters as the Theory of Evolution. Either "Intelligent Design" is science or it is isn't. No middle ground there.

One either believes the religious doctrine that human life begins at the moment of conception or that it begins sometime later. Further, one believes, or not, that when it begins, up to the time of viability, is matter of personal belief, that should not be subject to a religion-based criminal law, with the State taking one side in a matter of religious controversy, while criminalizing the other side.

There is no middle ground on the matters of voter suppression and gerrymandering. (And indeed, there is a very easy solution to the so-called "problem of voter fraud," even though it is virtually non-existent. Offer free voter ID/photo cards, available at many sites throughout each state that is concerned with the matter. Why the Democrats haven't taken this up since the beginning is beyond me.)

There is no middle ground on the rich being able to buy the government they want, with virtually no limits. One is either for the Citizens United "system" for buying elections, or one isn't. Nor is there a middle ground on whether or not the national infrastructure requires truly major, tax-based, government expenditures or it should be left to continue withering away to the point where the public will acquiesce in letting for-profit companies take it over (in which case things would only get worse. But that is another story.)

There is no middle ground on the matter of Separation of Church and State on, once again, abortion rights, as well as on gay marriage, LGBTQ discrimination, and, beyond the matter of abortion rights, the promotion by the state apparatus of one religion over another through the mis-named "Religious Freedom Restoration Act." The "middle-grounders" can only help the Republican Religious Right by muddying the waters on these fundamental issues and pretending that compromises can be reached. They cannot. The sooner the mainstream Democratic Party, and some well-meaning liberals as well, realize this, the better off our nation will be.

The Democratic Party will always be part of this country's Ruling Duopoly. But that does not mean that they have to give way to the Republicans on every single issue for which there is no middle ground. Faced with the reality of Trumpism, which is implementing the Far Right/Heritage Foundation and etc. agenda at a breakneck pace, mainstream Democrats, like Sen. Chuck Schumer, finally seem, in relative terms, to be developing a backbone. In this climate, an HRC re-emergence would make the worst nightmare of an increasing number of Democrats become reality, because there are still good Democrats around who are going to be taken in by her nonsense. Say it ain't so, Hillary.

Note: This column is based in part on an earlier one that appeared on The Greanville Post and the Planetary Movement.

Steven Jonas, MD, MPH, MS is a Professor Emeritus of Preventive Medicine at StonyBrookMedicine (NY) and author/co-author/editor/co-editor of over 35 books. In addition to his position on OpEdNews as a â€œTrusted Author,â€ he is a Senior (more...)
Related Topic(s): Democrat; Hillary Clinton; Middle Ground; Republican, Add Tags
Add to My Group(s)
Go To Commenting
The views expressed herein are the sole responsibility of the author and do not necessarily reflect those of this website or its editors.