What follows is an action proposal I drew up for climate activists gathered at a Buffalo-area United Church of Christ church, most but not all of us Christians concerned with expressing discipleship through effective climate action. One of the non-Christians myself, for me discipleship means, as it did for Thoreau, obedience to a "higher law" than any nation's statutes. Hence my stress on the urgent need to impeach Donald Trump for ecocide, a crime against humanity so horrible and unprecedented that it's not yet encoded in any statute. In reality, the notion of a higher law, enshrined in our conscience, underpins that perennial pearl of folk wisdom, "There ought to be a law."

My call to action is followed by a supplement: an e-mail to Noam Chomsky in which I sketch how the inexperienced youth climate movement can better take its own side in the propaganda war for US hearts and minds--as it's now tragically failing to do--against the self-serving anti-climate public speech of both Republicans and Democrats. 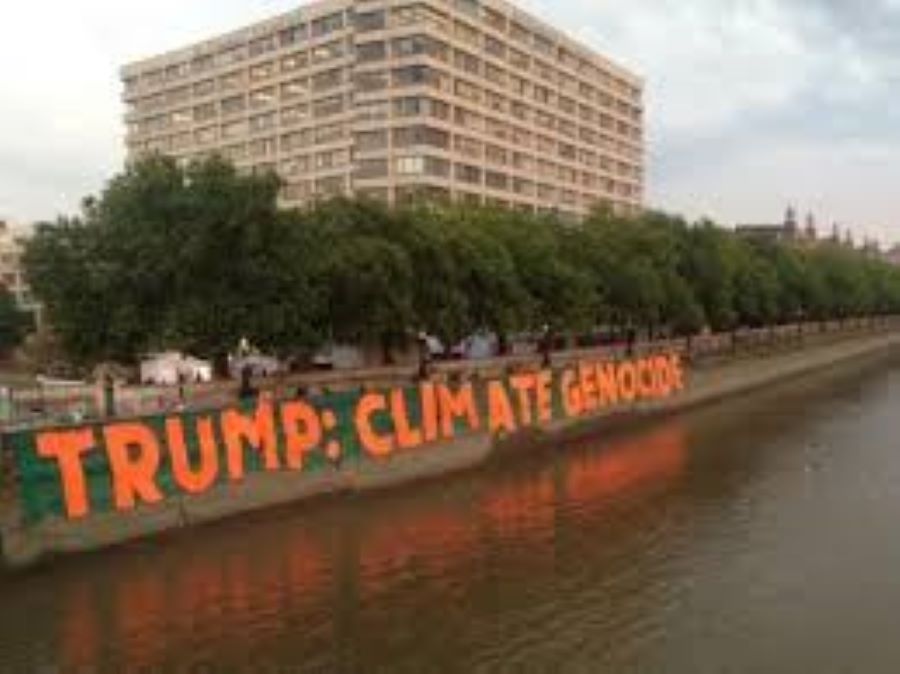 To make our pressure forceful, we'll enlist other liberal churches and the youth climate movement (groups like Sunrise, Zero Hour, Extinction Rebellion, etc.). Since my proposal is radical and probably unfamiliar, I'm sharing the well-researched political analysis supporting it.

In her books This Changes Everything and On Fire , Naomi Klein teaches us that the only adequate way to address the global climate emergency is by radical policy action by national governments--and ASAP, due to the climate emergency's short timetable for action. Citizens, via movements, must influence their own national governments (the only ones in which they have a voice). And because the US is the world's most powerful nation, Americans have a special obligation to influence our government to take radical, just, well-coordinated climate action. In the US, the package of radical, just, well-coordinated climate policies is now called the Green New Deal (GND).

Klein realizes that the GND is radical--and also that it harms the self-interest of the corporate and military interests that control our government and make it undemocratic. The only way climate activists can achieve something as radical and opposed to elite interests as the GND is by winning the battle for public opinion, getting so many Americans on our side that our government is forced to listen. Unfortunately, our politicians (of BOTH major parties) with their bully pulpits and our major media corporations are against us in the battle for public opinion, creating in the public mind the delusion that there's no climate emergency requiring immediate, radical action. Republicans and their media deny climate change altogether; Democrats and their media accept climate science, but sneakily undermine the realistic view that it's an emergency we must act on immediately. Understanding this is where Noam Chomsky comes in.

Along with political scientist Edward Herman (now deceased), Chomsky wrote an important book called Manufacturing Consent . In that book, Chomsky and Herman developed a "propaganda model" of US media. Major media are themselves big corporations, and they earn their income by selling advertising to other big corporations. Arms manufacturers and other suppliers to the military are also big corporations, and US military policy protects the international interests of corporations, so major media reporting has a strong pro-corporate and pro-military slant. But as Chomsky and Herman stress, what the media (and politicians) DON'T say and report is probably even more important than what they do say and report. It defines the limits of permissible political discourse, serving as a propaganda weapon schooling the general public in what issues they should consider important. Media and politicians ignoring crucial issues is a subtle form of mass brainwashing.

Donald Trump has done many wrong things, both illegal and legal but grievously harmful, that could have been used long ago to impeach him--and by far the most dangerous of these is his aggressive worsening of the climate emergency. That Democrats chose a Ukraine scandal that doesn't offend their military and corporate donors--rather than far more serious issues like ecocide that reflect badly on Dems themselves--to impeach Trump on is itself a form of propaganda subtly saying that climate crimes against humanity simply aren't important. With perhaps the most important presidential race ever underway, that's a disastrous, deeply irresponsible message to send. Without spreading a radical sense of climate emergency, we'll never get a large segment of the public demanding a climate-crucial Green New Deal.

Fortunately, a big national attention-getting situation like an impeachment process amidst a key presidential race offers a splendid opportunity for the climate movement to hijack the conversation and make the climate emergency our nation's top priority. That's the basis for what I'm proposing. By exposing Democrats' hypocrisy on climate--as well as Republicans' commitment to ecocide--in an election cycle when both parties are especially sensitive to public opinion, we can make the climate emergency the talk of the nation going into 2020.

HOW BEING POLITICALLY NAÏVE IS KILLING THE YOUTH CLIMATE MOVEMENT

No one can fault the idealism of the youth climate movement. Nor can we blame them for taking the lead on climate and failing to trust an older generation that has grievously failed them. But the chief "crime" of the youth climate movement is being young--and therefore lacking the experience to know crucial things it needs to know. Sadly, our collective failings as a generation have left them unwilling to realize that some of us have always been on their side and have learned things about politics they themselves desperately need to know.

Where the youth climate movement goes seriously wrong--perhaps from fear of offending potential supporters--is in leaving the anti-climate story both parties and major media are telling unchallenged. By stating outright that there's a climate emergency, they are in a sense challenging the stories of both political parties: the Republican one that climate change isn't real and the Democrat one that climate emergency isn't real. But by speaking in generalities and not doing political detail-- by not pointing out how anti-climate the actual daily actions and longer-term agendas of both parties are--they leave the climate-ignoring stories of both parties intact and let them brainwash the public that there's no climate emergency. Demanding Trump's impeachment over it would dramatize the mutually reinforcing climate irresponsibility of both parties in a way they and their media couldn' t ignore--in an election cycle that makes them especially sensitive to public opinion.