Clay Claiborne, blogger for the Daily Kos, reflects, in a recent diary, on Muammar Gaddafi's efforts, after he failed to move other Arab countries to acquiesce to his Pan-Arabist plans and ideologies, to instead concentrate on creating an African super-state under his leadership.

BLACK PEOPLE WILL PREVAIL IN THE WORLD

The latest age of slavery has been the enslavement of Blacks by White people. The memory of this age will persist in the thinking of Black people until they have vindicated themselves.

This tragic and historic event, the resulting bitter feeling, and the yearning for the vindication of a whole race, constitute a psychological motivation of Black people to vengeance and triumph that cannot be disregarded.

And how does Qaddafi expect that black people will achieve that vindication?


Black people are now in a very backward social situation, but such backwardness works to bring about their numerical superiority because their low standard of living has shielded them from methods of birth control and family planning. Also, their old social traditions place no limit on marriages, leading to their accelerated growth. The population of other races has decreased because of birth control, restrictions on marriage, and constant occupation in work, unlike the Blacks, who tend to be less obsessive about work in a climate which is continuously hot. 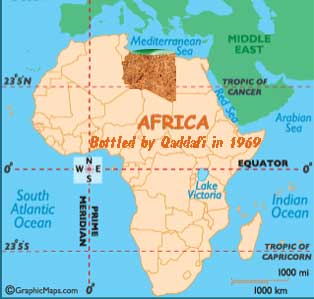 So we will do it through shear forces of numbers, by the explosive population growth of "starving and ignorant Africans."

From his 33 page 'book' that even today he hands out wherever he goes, it's easy to see that Mummar Qaddafi promotes a lot of the standard racist mythology that black people are lazy and promiscuous. He also uses the spectra of increasing hordes of blacks looking for vengeance to create a climate of fear, another standard racist ploy. As we will see, racism and the creation of discord between Africans and Arabs have been one of the keys to his 42 year rule. Another is his cynical and self-serving manipulation of contradictions among the people in sub-Saharan Africa.

Mummar Qaddafi represents that most virulent type of racist who combines parentalism with false adulation and then schemes to use racism and the fear of blacks by lighter skinned people to further his own plans. We have seen these racist fantasies play out before, most notably with Charles Manson and Ted Kaczynski, the Unabomber, and most recently with Anders Behring Breivik, who took large parts of the Unabomber Manifesto, updated it by replacing the word "black people" with "Muslims" and republished it as the manifesto for his killing spree that left 93 Norwegians dead three weeks ago. Here's a sample from the Unabomber Manifesto:

In all ESSENTIAL respects most leftists of the over socialized type want to make the black man conform to white, middle- class ideals. They want to make him study technical subjects, become an executive or a scientist, spend his life climbing the status ladder to prove that black people are as good as white. They want to make black fathers "responsible," they want black gangs to become nonviolent, etc. But these are exactly the values of the industrial-technological system...

While Mummar Qaddafi was building his influence in the Libyan army and plotting his coup d'e'tat against King Idris, Charley Manson was developing his racist philosophy and raising a Family. Manson's "philosophy" or more accurately, scheme, was that beginning in the summer of 1969, black people would rise up in vengeance for all the years of abuse and overthrow "whitey" while performing hideous acts of retribution. Manson and his Family would hide out in the dessert until the violence was all over. Soon the blacks would realize that they are too stupid to rule themselves and they would ask Charles Manson, as the only white man left, to rule them. He called this, his vision of revolution, an apocalyptic war between black and white that would put him on top, "Helter Skelter." I know this sounds unbelievable but it did cost a number of people their lives.

When events failed to develop as Manson expected, he decided to help them out. He claimed that black people were too dumb to figure it out for themselves so he would have to get the ball rolling. On August 8, 1969 Manson told the Family "Now is the time for Helter Skelter." That night, after midnight, he had his followers slaughtered five adults including Roman Polanski's wife, Sharon Tate, who was eight months pregnant, at Terry Melcher's Hollywood home. The next night they murdered Leno and Rosemary LaBianca at their Los Feliz home. They left "clues" at the crime scene that were intended to make it look like black militants had done it, like writing "Death to Pigs" in the victim's own blood and carving the word "war" in the stomach of their victims.

By August 16, Manson and 25 Family members were safely behind bars. Two weeks later, on September 1, 1969, Mummar Qaddafi came to power in an African country that put tremendous oil wealth at his disposal. So while Charles Manson has been safely behind bars for the past 42 years, Mummar Qaddafi has been given billions of dollars in oil money and the weapons they can buy, and the whole continent of Africa in which to play out his racist fantasies. This has meant four decades of Qaddafi manipulation and war-mongering in Africa that has been one of the major factors that has held the African continent, its nations and its people, down for so long. When Qaddafi finally falls, which should be soon, it will be a liberating experience for the whole continent of Africa.

Racist politics and a tumultuous summer of '69 aren't the only things Charles Manson and Mummar Qaddafi have in common. Phil Mershon has noted other similarities:

Both men consider themselves revolutionaries. Both men love to make speeches more than to engage in simple conversation. Both men have a small group of supporters and a humongous group of people who hate them. Both men prefer to live in the desert. Both men impersonated hippies. Both men employed female bodyguards. Both men have indicated that they believe themselves to possess supernatural powers. And both men give every indication of endorsing serial killings.

Both men also play chess and both men have the same attorney, the world's most infamous lawyer, Giovanni di Stefano, aka The Devil's Advocate. Or rather, Manson now has Qaddafi's attorney, since Stefano was Qaddafi's attorney first. Stefano just took on Manson as a client this past January whereas we know he worked for Qaddafi as early as 2007. Then he represented Qaddafi's promise not to execute the Bulgarian nurses accused of starting a HIV epidemic in Libya. Qaddafi's son's girl friend made him promise to get them off the hook before she would date him, but that's another story.

Possibly even Stefano doesn't know who really put him on the Manson case. His contact is "an attorney from Sacramento, California." That's how they do it when they don't want to leave a trail, so we are free to speculate about who might be eccentric enough to want to give Manson a second trial and has the money to pay an extremely expensive mouthpiece to pursue it, or who might want to communicate with Manson because his lawyer would have access.

Last August, Qaddafi attempted to use European fear of unchecked waves of African immigrants to extort money from Europe, telling them the EU should pay Libya at least 5bn euros ( -4bn; $6.3bn) a year to stop illegal African immigration and avoid a "black Europe".

"Tomorrow Europe might no longer be European, and even black, as there are millions who want to come in," said Col Gaddafi, quoted by the AFP news agency

"We don't know what will happen, what will be the reaction of the white and Christian Europeans faced with this influx of starving and ignorant Africans," Col Gaddafi said.

I am a student of history, religion, exoteric and esoteric, the Humanities in general and a tempered advocate for the ultimate manifestation of peace, justice and the unity of humankind through self-realization and mutual respect, although I am not (more...)
Related Topic(s): Africa; African Amputees; Arab; Fear; Mercenaries; Muamar Al Gaddafi; Revolution; Violence, Add Tags
Add to My Group(s)
Go To Commenting
The views expressed herein are the sole responsibility of the author and do not necessarily reflect those of this website or its editors.