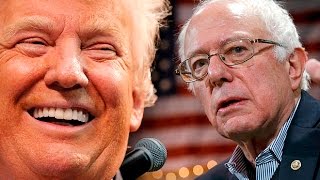 Leading Dems, mass media pundits, Green Party activists, and well-meaning Trotskyists are all telling Bernie Sanders what he "needs to do now." None make as much sense as Bernie himself.

"Donald Trump would clearly be ... a disaster as President of the United States," he told reporters after meeting with Obama last week. He found it "unbelievable" that the Republican Party would have a candidate who "makes bigotry and discrimination the cornerstone of his campaign."

"Needless to say, I am going to do everything in my power and I will work as hard as I can, to make sure that Donald Trump does not become President of the United States," said Sanders.

He had spoken briefly to Secretary Clinton, he said. "I look forward to meeting with her in the near future to see how we can work together to defeat Donald Trump and to create a government which represents all of us and not just the 1 percent."

He would not call off his campaign. He would continue fighting within the Democratic Party, and not as a Green or independent. He would continue at the party convention at the end of July to push the issues on which he won such support, even from Clinton supporters. He looked forward to a proper counting of ballots in California, and by implication a change in party rules to prevent such increasingly obvious election fraud. He was not prepared -- at least not yet -- to come out and explicitly endorse Clinton. But he would definitely work with her to stop Trump.

Bernie made all this sound perfectly natural. He would help lead the fight against Trump and his bigotry. But, at least so far, he would not soften the biting criticisms he has made of Clinton, her ties to big money, and her judgment, especially on her supposed strong suit, foreign policy.

Are millions of Bernie's supporters sophisticated enough to appreciate the distinction between opposing Trump and falling in lockstep behind the very flawed Hillary Clinton? I think we are.

Back in 2002, in the second round of the French presidential elections, Jean-Marie Le Pen of the neo-Fascist Front National faced off against the corrupt incumbent Jacques Chirac of the center-right. Almost the entire French left held their noses and backed Chirac, but without ever pulling their punches. My wife Anna and I had just moved to France and joined a march in our provincial capital against Le Pen. "Mieux le Super-Menteur que le Super-Facho," read the placards. "Better the Super-Liar than the Super-Fascist."

Decide for yourself whether Hillary qualifies as a Super-Liar. But, for Bernie and American progressives, the issue has to be Trump. Whether he is a Super-Fascist or only a fascist in waiting, as I suggested in March, he has energized the country's most dangerous fringe groups, from gun-toting Christian militias to neo-Nazis who are already calling him The Leader -- in German, Der Fuhrer.

Trump has created a political vehicle for the alliance these groups have long nurtured with Evangelicals and others who want to make America "a Christian nation," deprive women of their right to choose, and in writer Frank Browning's wonderfully apt phrase, "Make America Male -- Again."

Smashing Trump's bid for power will not eliminate these wingnuts from American life. Racist, religious, and misogynistic extremism are too much part of our history and culture. We have allowed them to grow unchecked far too long, even as we self-righteously congratulated ourselves on electing our first black president and stand ready to elect our first woman president.

Now is the best time we have ever had -- or might ever have again -- to dramatically weaken these extremists and break their hold on our future, especially with the political and cultural momentum that Bernie the grumpy Jewish Socialist brings to the fray.

With Bernie and his supporters spearheading the fight against Trump, the corporate wing of the Democratic Party, which the Clintons lead, will also find it difficult to ignore the platform and rule changes we now bring to the convention in Philadelphia. They will try, no doubt. But, from the comments I've seen, many ardent Clinton supporters favor the changes we put forward. They very much want to hold Hillary's feet to the fire on her hard-won opposition to Obama's trade treaties, fracking, climate change, and inequality, and on recognition of rights for Palestinians. If the Clintonistas block us on these and try to treat us like toast, as Slick Willie has suggested, they risk splitting the party, losing the election, and sacrificing America's future.

Like growing old, politics ain't for the weak-kneed, and the time has come to show just how pragmatic true idealists can be.

A veteran of the Berkeley Free Speech Movement and the New Left monthly Ramparts, Steve Weissman lived for many years in London, working as a magazine writer and television producer. He now lives and works in France, where he is researching a (more...)
Related Topic(s): Bernie Sanders; Donald Trump; Dump Trump; Trump Campaign, Add Tags
Add to My Group(s)
Go To Commenting
The views expressed herein are the sole responsibility of the author and do not necessarily reflect those of this website or its editors.