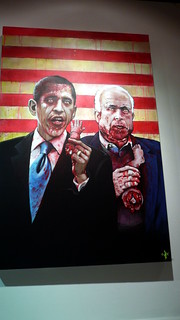 Although this short period of time between Halloween and election day is frightening, at the same time it is also exciting; it is like the last ten-second-bell in boxing for presidential candidates to fire their last salvo -- their state-of-the-art treats or tricks, to win the verdict of the voting public.

The American public remembers vividly what happened in the 2008 presidential election. In the final "10-seconds" of presidential round, Obama knocked out rival McCain with his horrifying "treat or trick" punch. The verdict went to Obama winning the electoral votes by 52.9% to McCain's 45.7%.

McCain was as tricky and hideous as Obama was, but hey, that was an unforgettable political Halloween day in the United States, the dark fright night of nocturnal creatures that frighten even the bravest Halloween buff in town. Obama, the winner, proved to be not only cleverly inexplicable but also very creepy.

Think about it: Obama had this frightening story of egalitarian wealth redistribution that makes the rich wet in their pants. American Capitalists always fear that Obama would turn the country upside down and with it out of their pocket and arm-bar Brazilian ju-jitsu goes their fortune, power and control of society.

Now that Obama is president, he is a political warlock that he promised himself to be, and scarier than ever before.

Look how he frightens the faint-hearted with publicly funded healthcare paid by higher taxes [damn that Obamascare], economic bailout binge, giant bureaucracy and burgeoning out-of-this-world government spending, while turning the country into a welfare state.

The "change" Obama dreamed of -- a legacy of "The Dream" of his socialist Kenyan father -- I suspect, is to rename this country Socialist Republic of America. Is there any doubt that the prospect of this happening is not only startling but also petrifying?

Most frightened Americans perceived that in a class war, Obama would level off the status and social standing of all Americans in America where there will be neither poor nor rich. Americans will live in a classless society of the Socialist Republic of America. Today millions of Americans are still paralyzed with fear because of Obama's geopolitical Halloween tricks. This class-leveling is just one of them.

Then-presidential candidate McCain's Halloween jargon was more anecdotal although no less scary. McCain speechified that Obama was a ghost with ghost-like promises -- elect him president and he will disappear like Casper the Ghost, from his world of promises.

Republican connoisseurs put words in McCain's mouth that tasted like insecticide, saying that if Obama "kills" corporations with multiple and retributive taxes to raise revenue for his trillion-dollar government spending because as a Marxist socialist he hates the rich, big taxpayers will leave the country. Millions of jobs will be lost, and Obama nails the "middle class" to the cross of penury, and consigns "the poor" to a grinding poverty. In Greek mythology, Hades, the god of the underworld, then rules the country.

Anyway, McCain's punch line was Obama is too scary for president. The Senator was too noisy with his spooky tales about Obama prior to election day. Now we still hear him but no longer louder than a drop of a pin in the dead-silence of his darkest night in politics.

The problem with McCain was, he was the problem. Immediately prior to election day, the threatening pro-Obama polls of victory hanged like the sword of Damocles over McCain's head. The great Republican Roman orator and statesman Cicero describes the sword of Damocles in his Tusculan Disputations as something dreadfully foreboding, like a rapier hanging by a thread over one's head that could snap any time without any hint or warning.

Related Topic(s): Halloween; Healthcare; Horror; Obamacare; Parody; Party Machine Democratic; Party Machine Republican; Politicians; Republican; Scary; (more...) Shutdown; Welfare, Add Tags  (less...)
Add to My Group(s)
Go To Commenting
The views expressed herein are the sole responsibility of the author and do not necessarily reflect those of this website or its editors.

Complete Domination Of Poor Consumers At The Gas Pump

Healthcare: Obama Must Stop Talkathon Go To Work And Save Dying Patients

No Longer God's Church For The Poor

OSCAR Awards for Sex and Violence Morally Objectionable And Dangerous