Huffpo columnist H. A. Goodman makes a very strong and interesting case that there isn't anything which will prevent Clinton from having to drop out of the race prior to the Democratic convention, and which will stop the DNC from being forced to name Bernie Sanders as the nominee.
In fact, Goodman believes that this is the real reason the DNC still hasn't declared Clinton the presumptive nominee, as the RNC has with Trump ("We're not presuming anything." says the DNC Party Chairman), and surprisingly (at least to me), they haven't declared her the presumptive nominee:click here
Is it really because they just don't want to tick off Sanders?
Maybe. Maybe not... 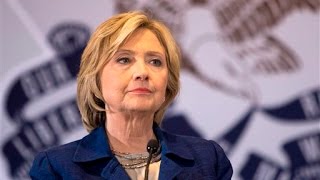 Former dishwasher, janitor, telemarketer & librarian. Currently assisting the elderly. Ardent Sanders supporter.
Related Topic(s): Clinton Cash; Clinton Foundation; Clinton Library; Columnist; Democratic; Race; Sanders-Bernard, Add Tags
Add to My Group(s)
Go To Commenting
The views expressed herein are the sole responsibility of the author and do not necessarily reflect those of this website or its editors.