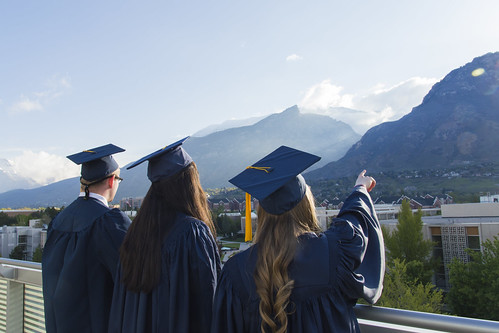 Graduation Day
(Image by aaronrhawkins)   Details   DMCA
Once again, in the blossoming spring of the year, thousands of graduating seniors will be sent forth into an unknown future to assume the onus of perpetuating a precarious human existence. They will be assembled in the hallowed halls, playing fields or sports arenas of all manner of institutions of higher learning to hear a wide variety of dubious commencement speakers chosen for a variety of dubious reasons. Selected at my college to introduce the candidates for presentation of their cherished diplomas, it became my obligation to sit through a wide variety of declamations ostensibly delivered to inform and/or motivate the captive audience. Rarely was such a goal achieved by the speaker or realized by the recipients, clothed in black robes and baking under a blazing sun or sweltering in an oven-like auditorium or field house.

More often than not, this abused audience was subjected to little more than an autobiographical sketch of the accomplishments or notoriety that (again, ostensibly) caused the administration to invite this particular guest. I say ostensibly because once again (more often than not)," reciprocation would be expected for the obligatory honorary degree by said institution in the form of a philanthropic donation. Such is the protocol for institutions of higher education.

Occasionally, however, the selection of a commencement speaker by the administration will meet with student opposition on the basis of some political, religious or other issue which proves embarrassing for both the administration and the invited guest. Contrary to many of my more radical views and expressions, I often find myself coming down on the side of the administration in such disputes. Overriding all other of my proclivities in the matter of civics is my democratic insistence upon an absolutely free exchange of information and ideas. Just as we have the freedom to speak or not to speak, we have the freedom to listen or not to listen. Any attempt to restrict or limit this free exchange is an attempt to deny me the information needed for rational and intelligent decision making. It is even advantageous for me to keep abreast of the irrational and irrelevant.

With the likelihood that the oppressed student will not remember what was said or even who it was who said it, he or she will venture forth into the vast unknown with nothing more than a prayerful hope that each may eventually "find" him or herself, as determined by the innate talents each may possess. Until a student does so, there will be little chance for meaningful happiness. All too often, a career choice has already been made with the selection of a major upon entering college, and all too often that choice has been made on the basis of an anticipated financial return to be expected on completion of one's studies, with the faulty assumption that a healthy income somehow equates with happiness. It does not.

Let me cite an example of what I mean. Way back in 1957, when none of the teachers would volunteer, I was asked to direct the senior class play at a local high school. Remember now, this was the year that Russia inaugurated the Space Age with the launch of Sputnik. I had cast the school's leading academic student as the male lead in the play. Because of the fearful craze our intelligentsia had been thrown into with the USSR's success, all attention and effort must be focused on a scientific goal. Naturally, our young academic achievers were directed and destined to regain the nation's respect by surpassing the USSR's scientific accomplishments. Thus it was with our young man. He was sent off to college where he would major in physics and follow in the footsteps of Einstein. However, after his first year of scientific pursuit, he suddenly declared a major in English, to the surprise of all. It seems that the joy he derived from his first theatrical encounter in high school uncovered a potential for happiness he had never expected. It was not in science. After graduation from college as an English major, he taught high school before obtaining his master's degree and returning to his college as an instructor. But through it all he realized that for fulfillment, nothing would serve him better than theatre. So it was off to the Big Apple and a continuing career in theatre which has lasted to this day. But I digress.

My point is to suggest that if fulfillment is your goal in life, a decision for a career should not be made based on how others may have succeeded or the potential for financial security, but on what your heart desires. Having sat through all too many longwinded and meaningless commencement speeches, I have resolved that should I ever be asked to deliver one (which is most unlikely!), it would be in the form of my simple poem which, in spite of its brevity, says all that the graduate (and you, the reader) need to hear and know:

On this, your day, you will receive

advice from everyone you know.

There's little of it you'll retain,

And really there's no reason why you should,

for what you will most likely get

are all the things that brought success to them,

as though your life should be a mirror of their own.

But who knows what your life will be,

Hal O'Leary is an 88 year old veteran of WWII who, having spent his life in theatre, and as a Secular Humanist, believes that it is only through the arts that we are afforded an occasional glimpse into the otherwise incomprehensible. As an 'atheist (more...)
Related Topic(s): Commencement; Graduation; Happiness; Poem; Speeches; Success, Add Tags
Add to My Group(s)
Go To Commenting
The views expressed herein are the sole responsibility of the author and do not necessarily reflect those of this website or its editors.

BALTIMORE, The Jig Is Up

A Different Perspective For The War On Terror; Qui Bono

A Loss of Truth

A Purpose For Education