If Trump wins, America loses. The outcome is up to you in November 2020. 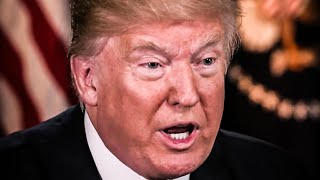 Trump Aides Unhappy About His Attacks On Elijah Cummings,
(Image by YouTube, Channel: The Ring of Fire)   Details   DMCA

Donald Trump is "dumb as a rock" (to use his phrase) when it comes to the programs and the policies of the federal government agencies over which he is allegedly presiding. However, when it comes to defending and expanding his own political power, Trump is shameless and profoundly cunning.

Trump turns accurate appraisals of himself into accusations that he levies at others. Earlier this month, he questioned whether Joe Biden "is mentally fit to be president."

But Trump has found ways to spread his toxicity beyond his lying tweets. He has carefully developed formidable barricades to shield himself from the gathering storm regarding his countless impeachable offenses and other serious misbehaviors.

Trump's remarks, decisions, and asides reveal his plans to stay in office. Trump heaps praise and extra funding on the military. In his travels, Trump likewise incessantly praises the police regardless of the local situations. Trump has openly said these constituencies are the core foundation against his adversaries that will keep him in office. His White House will keep the military and the police very well endowed.

He also makes sure that big business is happy with him. Some of the bosses are getting anxious about the uncertainty associated with Trump's use of tariffs and his caustic remarks about leaders of the countries where U.S. companies do business. However, Trump knows that as long as he cuts corporate taxes; deregulates health, safety, and economic requirements on Wall Street; and continues the crony capitalism of subsidies, handouts, and bailouts; the corporate bosses will continue to pay obeisance to Trump.

Manipulating the mass media is child's play for Trump. He taunts them about how they have to give him top billing because of the profitable ratings his performances brings them. Some in the mass media, nonetheless, expose his wrongdoing with thorough features. Trump, though irritated, ignores these exposes' and repels them like water off a duck's back. It's all "fake news," he shouts. His approval polls, though lower than previous presidents, stay firm. So far Trump has faced no real consequences from the revelations of his misdeeds.

The courts, meanwhile, are the president's trump card for endless delays. Who has been sued as president more than Trump? Over two and a half years into his term, litigation against Trump grinds on. Nobody knows how long these court actions will take, what with Trump's delay tactics and appeals. The top appeal is to the Supreme Court which he believes is 5 to 4 for him on just about everything relating to runaway presidential power and immunities. Trump has appointed 146 judges while in office, including two Supreme Court justices. Trump's chosen Supreme Court justices are partisan actors who will suit his purposes nicely -- it is as if they came from "central casting" for him. Trump has declared unlimited presidential pardon powers, musing that he could even pardon himself.

Labor unions are another big joke to Trump. As they decline, Trump reminds the pro-Democratic Party union leaders that many of their rank and file members voted for him. A troublingly large minority of union workers -- over a third -- defected to Trump's camp in 2016, enough to make the union leaders skittish about seriously confronting him.

That leaves the Congress with which he toys. The Republicans are frightened chickens in a coop, peering out at the insatiable Fox. When they look back at their place in history, they'll have to squint. Sycophants all, except for the late Rep. Walter Jones and Rep. Justin Amash.

As for the Democrats, Trump is blocking subpoenas and orders for witnesses to testify. Trump is also turning down major demands for documents from several House Congressional Committees. Exercising their constitutional authority to oversee the executive branch, the Committee Chairs are filing one law suit after another. Trump laughs and tells his attorneys to keep stonewalling and appealing -- which can mean years. That's how he operated during his sordid failed business career.

Donald Trump, selected by the Electoral College, is daring the Democrats to impeach him. He knows Democrats are divided and can use the Republican dominated Senate as an excuse for inaction. Of course impeachment is a constitutional duty for the House, not a simple political calculation. It is certainly warranted for the most impeachable president in American history.

Trump is thumbing his nose at Democrats daily, blocking oversight, allocating appropriated funds by executive dictate, brazenly freezing enforcement the laws or revoking regulations that protect the health, safety, and economic well-being of the American people, enriching himself through emoluments, and also casting aside the Constitution and the rule of law regarding his military and foreign policy aggressions.

Related Topic(s): Impeach; Trump Against Democracy; Trump And Bolton; Trump China Trade War; Trump Liar; Trump Scandal, Add Tags
Add to My Group(s)
Go To Commenting
The views expressed herein are the sole responsibility of the author and do not necessarily reflect those of this website or its editors.