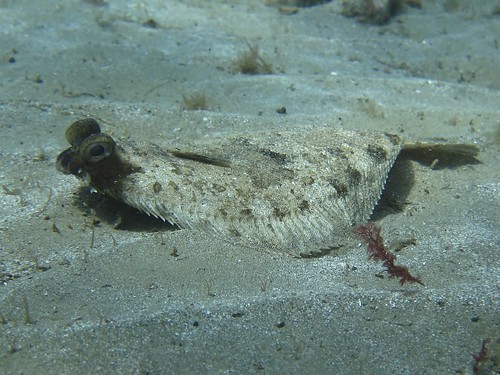 Roughly twenty years agoI encountered the word "founder".I was godsmacked. What? Isn't it flounder? Or is that The bottom fish with the flat faceThat we can't eat anymore?
I was floundering. . . Or was I foundering?Feeling a little queasy.I was experiencing a sinking feeling.I had always, up to that momentBeen very confident about Using the word flounder as a verb.
But now I cast my netAnd instead of flounderI came up with founder.What happened to the 'l'?What happened to my confidence?What was I to think?
How could I trust myself with words?They seem like old friends untilThey turn on you with a snide,"Did I ever really know you?"Were we ever really Even friends?
Sure, one means "sink"And one means "struggle",I know I know, (I know now!)But surely one can founder And flounderAnd be doing the same thing.
No! (The answer came down.)
Godsmacked by my native language!How many times had I misused flounder?I felt like that sad bottom fishWeighted down, flattened by A sea of languageI looked up with my sad flat face
At my surface self fishing in the sunAnd then it was if a great cloud passed overAnd I was alone at the bottomIn that deep sea-dreamtimeI thought of all the times That I could have saved myself
From the spell of the Webster Collegiate Dictionary.Which I studied like an Irish-Celtic monkIn a monastery in the wee hours Staring at the LatinOf the Roman Catholic BibleUntil the words caught fire
And burned the Book of Kells into his brain.Was I poet or magician? I wasn't sureAs I let myself be hypnotizedBy the pseudo-mysticism of the language.I only knew I had a calling.
Little did I know That I was being hookedAnd reeled in By a language that has a historyOf filleting imagination,A language of disconnected words.
I could have saved myself!I could have learned a Romance language.Spanish! Oh Spanish! We could have been So good together. Imagine Reading Neruda and Lorca untranslated!
When Lorca wrote:Con trajes color naranjaI would have known that he was saying,"With jackets the color of oranges"What a beautiful world we could have made? Con trajes color naranja!
Instead of casting my lotWith a language that Will always elude me,That seems to enjoyFeeding my illusions And then tripping me up royally!
A language that will never make total sense.Yes, one day, twenty years agoI stopped walking on waterI went straight downI foundered.I sank like a stone.
But I didn't stop writing, thank god,Even though people must have noticed There was a change in me.Maybe it's for the better.Maybe I was just destined not to donThat jacket that evokes oranges.