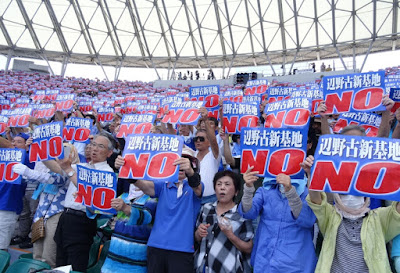 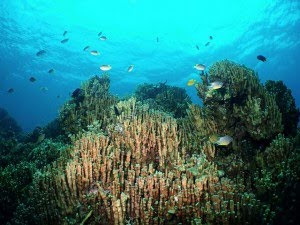 
The right-wing newspaper, Washington Times, ran a piece on Monday entitled "The other side to the Okinawa story: The 'All Okinawa' opposition to US military presence [occupation] is a leftist ruse".

The hit piece was written by Robert Eldridge (political affairs and public diplomacy officer, Marine Corps Installations Pacific on Okinawa). He wrote about the current visit of Okinawan Gov. Takeshi Onaga to Washington to express the demand of his people that the US government close the military bases on their island. Gov. Onaga was elected in a recent landslide vote by the citizens on Okinawa who have had more than enough of US bases, destruction of their environment and culture, and want them immediately closed.

In the Washington Times Eldridge commented:

Mr. Onaga, a four-term mayor of Naha, the prefecture's largest city, was elected governor in November 2014 as the result of a sophisticated campaign amid a highly divided and complicated election. Although formerly a conservative and once rising star of the ruling Liberal Democratic Party (LDP) in Okinawa, even running his opponent's re-election campaign in 2010, he broke with his predecessor and chose to run on an anti-base platform dominated by the organizational might of the Communist Party, the archenemy of the conservative LDP...

There are many other fictions created by these activists [Okinawans who oppose US bases], who work hand-in-hand with the local media, national and international "peace" groups and politicians, and whose base (no pun intended) are these very anti-base forces...

There is more than meets the eye regarding Okinawa. Washington, especially those in the media and think tank world, mustn't be fooled any longer. Okinawa is too important geostrategically for the United States, Japan and the entire Asia-Pacific region to become, as Mr. Onaga urges, "a peaceful buffer zone with no bases."


Mr. Eldridge gives himself away when he spins on about the 'geostraegic importance' of Okinawa to Washington and the Pentagon's 'pivot' into the Asia-Pacific region. Instead of the US taking responsibility for the 70-years of American abuse of Okinawa, the author slams the governor who turned against his own right-wing ruling party in Tokyo in order to give voice to the people's deep outrage. For that he is accused of being an agent of Bejing. Pure red-baiting trash.

On Sunday I joined several members of Veterans for Peace (VFP) to deliver a letter to officials from the Okinawan government that was addressed directly to Gov. Onaga. The letter gave strong support to the island people in their long struggle to rid their homeland of US military bases. VFP national board member Tarak Kauff (New York) read the letter that concluded with a pledge to build national and international support for Okinawa and declared that, if invited, the organization wished to send a strong delegation of its members to the island to stand with the people.

Immediately after Tarak had finished reading the letter one Okinawan official said, "You have our invitation. Please come and see for yourselves."

In the fall VFP will indeed lead a delegation to Okinawa and will go to Jeju Island in South Korea as well. These twin-campaigns for peace and environmental sanity represent the most visible Asia-Pacific island struggles that are similarly being waged in Hawaii, Guam, the Philippines and beyond as the US moves to consolidate control of the region on behalf of corporate interests.

Following the presentation of the letter everyone moved to a nearby restaurant where about 60 people gathered to have dinner with Gov. Onaga and the delegation of other elected officials from Okinawa. Many of those attending the dinner were Okinawan-Americans, women who had married former American GI's or other US officials that were once stationed on the island.

There is much talk about whether the Okinawan delegation to DC will be successful in changing US policy. Considering that Obama won't even answer letters from elected officials on Okinawa does not give one much confidence that US policy is likely to change anytime soon. But don't be fooled by inside-Washington baseball. The real change is taking place in the hearts of people on Okinawa, in Japan, and throughout the world. The images of the US Marines building a runway that will extend out into pristine Oura Bay where coral and endangered sea mammals are being threatened reveal a manifest injustice. Already large concrete blocks have been dropped into the bay at 75 sites (for runway construction) and as a result 94 colonies of coral have been destroyed.

The fact that the US ignores the voices of 80% of the Okinawan people and plunges ahead with devastating base expansion indicates the obvious colonial status of the island people.

In Japan taxpayers are apparently allowed to target to which prefecture (regional government) they want their taxes to be sent. As a way to express solidarity for Okinawa, all across Japan taxpayers are designating that their money go to support the people fighting the US imperial bases.

Even here in the US there are legions of citizens who would support the heart-broken people on Okinawa or Jeju Island if they only knew about what was really going on there. Thus the decision by VFP to stand with the people in the Asia-Pacific is significant because it opens the door for the American people to learn about this atrocity being committed by the US endless war machine. It is a good time for people to open their hearts and speak out against the global full spectrum dominance project by Washington.

Tarak concluded the letter to the Okinawan people by reading:

Related Topic(s): Korea; Marines; Military; Nature; Obama; Peace; Red-baiting, Add Tags
Add to My Group(s)
Go To Commenting
The views expressed herein are the sole responsibility of the author and do not necessarily reflect those of this website or its editors.