As a child, he lived in a small apartment in an alley at the foot of a bridge over which railroad tracks ran over Cleveland's St. Clair Street (or Superior Avenue, I think). The tracks unloaded at the dock of the large paint manufacturing company (Sherwin Williams, I think) at Lake Erie's edge.

Steve was a burly guy who liked drinking beers and brawling. I was told my dad was often left to finish those brawls. Steve and George became known as the "Mad Hunns." The Moniker stuck so well to my dad that he changed his name.

Mom and dad's first double date with Uncle Tony and Aunt Ann did not go well. Uncle Tony knew dad well and referred to him as "Hunn."

Mom knew him by his real name, George Savanovich. By the end of the evening, mom was sitting by her rear seat doorknob and strongly suggested that dad not bother calling. In Croatian, mom's native language, "Hunn" translated as "homoseksualac" or "gay."

Back then, even among liberal Croatians, having your beautiful daughter associate with a "homoseksualac" was not smiled upon.

Grand Ma was not mad when Uncle Steve enlisted. She was heartbroken. After he enlisted, she was never seen again. Some say she mourned the enlistment of her son on a stormy night while walking the rocks and piers of Lake Erie and fell in.

Since his brother was in the war, dad was wheelchair bound, and mother dead, my dad did not have to serve in the war. Instead, he started selling newspapers as a 10-12-year-old kid and ended up being a truck driving newspaper delivery man for the Cleveland News, Press, and Plain Dealer for about 40 years.

Dad had a job, took care of his father, and could afford nice clothes, so he did what was considered sane for the depression lingering times. He chased the prettiest girl and best dancer in the neighborhood, my Golden Mom to be.

Dad danced around his bumpy name, and two of Cleveland's finest dancers made observers jealous as mom and dad smooth stepped over many dance floors that were so prevalent in the 30's thru 50's. 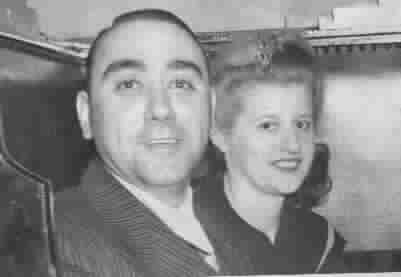 I would shine my dad's shoes, for those special occasions, like when he went dancing with mom. I liked the reflective shine on my dad's French-toed shoes. Guess I was proud of what I could do with polish, spit, and the shine-inducing cloth. Dad, a newspaper deliveryman, would tip me with pocket change, which newspaper store deliverymen always had, and I would like that too.

One day dad surprised my buddies Roz, Marty, and me by coming to our baseball practice at Byers Field, which he never did. He came to the games but not our practices. I had my sturdy, hand painted black and red Schwinn bike, which dad bought second-hand. Marty was on the handlebars, Roz on the back fender, and I pumped away until we crossed what is today the Parma Town Shopping Center's parking lot to Parma's city swimming pool.

Related Topic(s): Cleveland; Depression; Father; Fathers Day; Ohio; Teamsters; Testify; World War III, Add Tags
Add to My Group(s)
Go To Commenting
The views expressed herein are the sole responsibility of the author and do not necessarily reflect those of this website or its editors.