The giveaway was what they didn't say, or rather what was left out of the Non-Prosecution Agreement with the SEC. Usually, the deal includes a promise by the company to "sin no more," to stop making all those deceptive and misleading statements in its public filings.  Not this time.   Fannie Mae agreed to no such thing. Despite SEC claims that Fannie misled investors by underreporting the "true" exposure to subprime and Alt-A loans, despite unnamed sources claiming that the FBI is conducting a criminal investigation into the matter, Fannie never agreed to change the way that it calculates its subprime or Alt-A numbers in public financial disclosures. The company has in no way suggested that it will change the way it reports those numbers in the future. Nor has it suggested that it will amend any prior SEC filings. And the reason seems pretty obvious. The company wants to make sure that any financial disclosures continue to pass the laugh test.

And if the SEC's mission is to protect investors by compelling disclosures deemed by the agency to be necessary and appropriate, then, at least this time, it has forsaken that obligation.

As noted here before, as well as in Joe Nocera's column in The New York Times, the SEC's  lawsuit against Fannie Mae executives depends entirely on how you define the words "subprime" and "Alt-A," two terms for which there are no precise, generally agreed upon, definitions in the marketplace. The SEC claims that these executives had the specific intent to deceive investors about the quality of Fannie's loan portfolio by deliberately understating Fannie's exposure to "subprime" and "Alt-A" loans. As explained previously, SEC's attempt to define "subprime" may not survive a motion to dismiss, because investors and judges read financial filings very carefully. They don't cherrypick from the text. They read entire documents for context and interpret the meaning of "subprime" accordingly.

The difficulty in defining these terms raises the obvious question: If everyone has a slightly different definition for a loan category, and the definitions have changed over time, how can anyone communicate? Why do people find these words to be meaningful?  The answer is simple and obvious.

Everyone--aside from shills for right wing think tanks--uses a definition that can be validated by loan performance. The categorizations are supposed to identify those loans that will perform significantly worse than the rest of the mortgage market, or significantly worse than the rest of a loan portfolio. That's the information investors seek out. That's how federal regulators, who gave no clear-cut definition of "subprime" loans, validate whether a subprime designation makes sense: 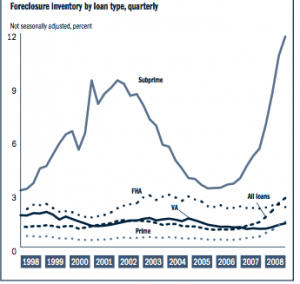 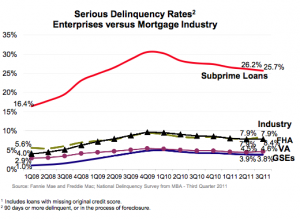 LPS, which uses a different definition of subprime and Alt-A, shows the same pattern. The subprime and Alt-A categories represent small percentages of the nationwide total, but their rates of foreclosure are many times higher than that for prime loans or for overall market. 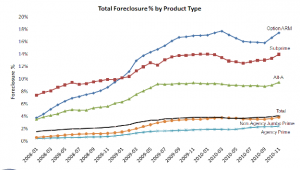 Moody's shows similar results in its July 15, 2011 report, "2005 -- 2008 US RMBS Surveillance Methodology."  The ratings agency estimates that, for 2006-vintage private label securitizations, deals comprised of jumbo loans will lose, on average, 7.2% of the original loan balance. For subprime deals the loss rate is five times higher, or 37.6%. For Alt-A deals the loss rate is more than three times higher, at 25.3%.  At the risk of belaboring the obvious, if you lumped together the jumbo loans and the Alt-A loans into one category, investors would get a misleading view of particular risk concentrations.

The [SEC] complaint is extraordinarily weak. Taking its cues from the Wallison/Pinto school of inflated data, it claims that Fannie and Freddie failed to reveal to investors the true extent of their subprime portfolios.

He was referring to Peter Wallison's ridiculous claim--that  27 million loans, about half of all mortgages in the U.S., were "subprime or otherwise weak by 2008. This one metric, the foundation of The Big Lie, fails the laugh test.  It's like saying half of all Americans are Jewish, or that half of all law students are likely to edit the law review.  If 27 million loans are "subprime or otherwise weak," how could it be that, following the worst housing crash in American history, no more than 8.1 million loans have ever been delinquent, even for no more than 30 days? And why is it that, according to LPS,  no more than 5.3 million loans, out of a nationwide total of 55 million, have ever been seriously delinquent?

Wallison's colleague at The American Enterprise Institute, Ed Pinto, devised his own definition of "nonprime" to arrive at a 27 million number that would lend a veneer of plausibility to Wallison's false claim that government housing policies and the GSEs, not Wall Street, were the primary causes of the financial crisis. (To see how Pinto deceptively cherrypicked from regulatory guidelines, go here.) Real investors examine loan performance on a comparative basis. That's what the FCIC did when it eviscerated Pinto's "research." That's what the Center for American Progress did when it similarly demolished Pinto's work. That's the issue Wallison publicly promised he would address in his FCIC dissent.  But of course he never did. (Which may be why the AEI scrubbed the video of Wallison's response to David Min's withering analysis at an AEI event.) Instead, Wallison lied to Congress and claimed that that the FCIC never examined Pinto's work. That's why Washington Post columnist Barry Ritholtz identified Peter Wallison as one of the biggest proponents of The Big Lie about the financial crisis. And that's why Joe Nocera, bound by the stylistic guidelines of The New York Times, was able to characterize Wallison's claim as The Big Lie.

Everyone who seriously follows the mortgage markets knows that, for more than a decade, GSE loan performance has been exponentially superior to that of the rest of the market.

Which is why none of the other Republicans on the FCIC dared to attach their names to Wallison's dissent. Wallison, Pinto and their supporters remain adamant in their steadfast refusal examine comparative loan data regarding delinquencies, foreclosures and losses. But as Ritholtz notes, "[E]conomics looks at actual consequences in terms of real dollars. So let's follow the money and see what the data reveal about the causes of the collapse." Which is why Nocera chastised Republicans for parroting Wallison's crackpot claims.

Wallison says that the complaint vindicates his thesis and discredits the FCIC report. Of course, the opposite is true. The complaint confirms the FCIC's findings that Fannie increased its appetite for low-documentation loans beginning in 2005, in order to recover market share that was lost to private label securitizations, not pursuant to government housing goals.

However, no one disputes the total credit losses on Fannie's $2.7 trillion single-family loan portfolio over the last few years. The only dispute is over how those loan losses should have been allocated. Viewed in that context, both the SEC complaint and Wallison's thesis simply fall apart.

The FHFA lays most of it out on pages 12 and 13 of its latest Conservator's Report on Fannie and Freddie. On page 12, you see that, over the past 3.75 years, Fannie's cumulative credit losses (Provision for Credit Losses)  total $121 billion, on a mortgage book that has remained pretty stable at around $2.7 trillion. So the cumulative loss rate is about 4.5% of the portfolio. 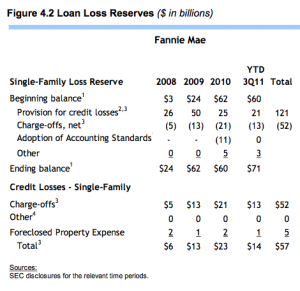 And if you look on page 13, you can see that Alt-A loans (as designated by Fannie), were about 11% of the mortgage book at year-end 2008. But they generated about 38% of cumulative credit  losses. Based on the reported 12/31/08 Alt-A balance, $292 billion in loans had a loss rate of about 16%, or about five times higher than that for the remaining $2.4 trillion mortgages on Fannie's books. For the other 89% of the loan book, the loss rate was under 3%, which is pretty damn good performance after a housing crash. (See also, "The Real Reason Fannie and Freddie Lost So Much Money." 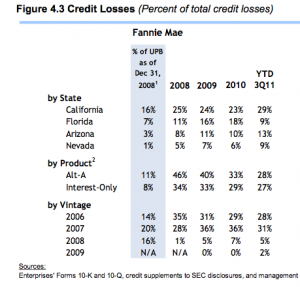 Remember, investors are looking for risk concentrations indicating poor loan performance. Based on Fannie's reported Alt-A loan data, investors see a proportionality and order of magnitude that appears to be consistent with loan data reported everywhere else.

But consider this paragraph from the complaint: 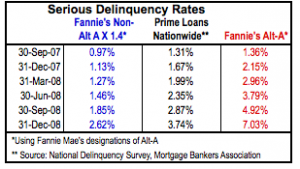 The SEC claims that the "true" Alt-A amounts were twice as high as the reported Alt-A amounts. For instance on March 31, 2008, Fannie reported $311 billion in Alt-A loans, and the SEC says that Fannie omitted approximately $323 billion from the total Alt-A amount. But since the "undisclosed" Alt-A loans had a serious delinquency rate that was about half that of the disclosed Alt-A loans, inclusion of those additional loans would have significantly improved the delinquency and default rates for that risk category.

Which is why the SEC will never be able to prove that senior management had the specific intent to deceive investors, or that investors were clearly harmed by by Fannie's categorizations.

For Fatal Flaws In The Lawsuit Against Fannie Mae Execs, Part 1, go here.

For over 20 years, David has been a banker covering the energy industry for several global banks in New York. Currently, he is working on several journalism projects dealing with corporate and political corruption that, so far, have escaped serious (more...)
Related Topic(s): Definitions; Financial; Housing; Housing; Lawsuits Celebrity; Losses; Party Politics Republican; SEC, Add Tags
Add to My Group(s)
Go To Commenting
The views expressed herein are the sole responsibility of the author and do not necessarily reflect those of this website or its editors.