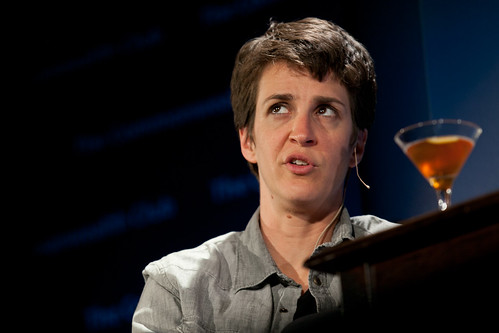 Except for the New York Times and various websites , my wife and I rely primarily on MSNBC to keep up with the news. Two of our favorites are Chris Hayes and Rachel Maddow, because they are both brilliant and entertaining. However, while I like the way they cover most stories, their treatment of 9/11 is disappointing. In fact, although MSNBC has been second to none in criticizing President Trump's treatment of the media as consisting of "fake news," MSNBC itself has been guilty of spreading false accounts of 9/11. The fact that it shares this sin with the rest of the mainstream (corporate) media, and even much of the alterative media, does not make it any less blameworthy.

Besides simply repeating the official account of 9/11 (the falsity of which has been easily knowable since at least 2005 [1] ), some MSNBC commentators have gone out of their way to defend the official account and to criticize the 9/11 Truth Movement. One example is Rachel Maddow.

Maddow spent considerable time praising The 9/11 Commission Report, saying that it is inexpensive and reads like a novel; better yet, a comic book version of the book was published, making the commission's report even more accessible. [4] However, Maddow said nothing about the book's contents. Most disappointing: Although she was a Rhodes scholar, who earned a Ph.D. at Oxford, she did not refer to any of the critical literature about the book.

The other 9/11 book lifted up for praise by Maddow was the book by Popular Mechanics, entitled Debunking 9/11 Myths: Why Conspiracy Theories Can't Stand Up to the Facts. [6] This book, she reported, "was written specifically to take on the claims of the people who said that 9/11 was an inside job."

Speaking (incorrectly) of the authors of this books as the "geeks and engineers at 'Popular Mechanics,'" [7] Maddow said that they went through the "9/11 was an inside job arguments" point by point, "disproving them" - such as the claim about the supposedly planned explosions that took down all those buildings." Maddow concluded her treatment of the Popular Mechanics book by telling readers that it is "very good."

However, Maddow's treatment of this book was completely unscholarly. How could she responsibly say that this book disproved the idea that 9/11 was an inside job without examining some of the critical literature - in which one could perhaps see how scholars in the 9/11 Truth Movement have responded to the alleged refutations.

David Ray Griffin is professor emeritus at Claremont School of Theology and Claremont Graduate University, where he taught philosophy of religion and theology, with special emphases on the problem of evil and the relations between science and (more...)
Related Topic(s): 911; Chris Hayes; Rachel Maddow, Add Tags
Add to My Group(s)
Go To Commenting
The views expressed herein are the sole responsibility of the author and do not necessarily reflect those of this website or its editors.

Was America Attacked by Muslims on 9/11?