On December 2, the 25th two-week long United Nations climate conference begins in Madrid, Spain. The stated task of the conference, referred to as COP 25 (Conference Of Parties), is to make sure there are plans to meet the goals of the Paris Climate Agreement. The goals of that agreement, which are nonbinding, are:

Last week, prominent scientists issued a warning that significant changes related to the climate crisis are already happening and could create a cascading effect that locks in catastrophic levels of temperature and sea-level rise. They view the pledges made by countries to take climate action as insufficient and leading to a three degrees Celsius temperature rise by the end of the century.

It is this reality that is spurring people around the world to take action in the growing global climate emergency movement. Many people are asking what they can do about the climate crisis. 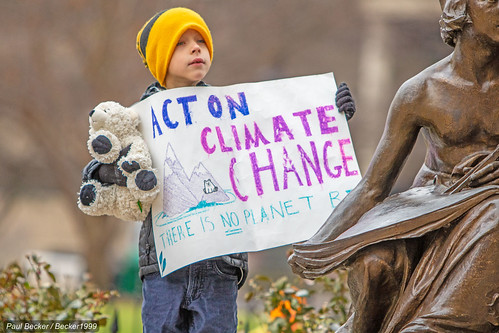 Too little, too late

Each new climate report is direr. The climate crisis is here now. Oceans are heating up and acidifying as they absorb carbon dioxide. This is slowing ocean circulation and killing coral reefs. Ocean circulation impacts the weather - slowing is already changing weather patterns and worsening storms. Coral reefs are necessary for providing habitat and protecting coastlines.

According to a recent Intergovernmental Panel on Climate Change (IPCC) report, ice is melting at an unprecedented pace and sea-level rise is accelerating. This is leading to more frequent and chronic flooding. The world has already warmed to 1.1 degrees Celsius above pre-industrial levels causing droughts and frequent wildfires.

Of great concern is the fact that these changes are not isolated. They feed into and feed off of each other causing a cascading impact that is leading us to a point of no return, at least for thousands of years. For example, as the land thaws, stored methane is being released. Methane is the most potent greenhouse gas in the short term causing more warming and more thawing. The prominent scientists cited above explain this:

""as science advances, we must admit that we have underestimated the risks of unleashing irreversible changes, where the planet self-amplifies global warming. This is what we are seeing already at 1°C global warming""

Efforts to reduce greenhouse gas (GHG) emissions are failing. Levels are rising even though we need at least a 7.6 percent reduction each year to reach the Paris Agreement goals. Growing energy demand is the biggest culprit. Colder winters and warmer summers mean more energy used to heat and cool our homes and other buildings. In the United States, gas consumption increased by ten percent in 2018 after years of decline. The increase in renewables is not even meeting new energy demands, let alone replacing polluting forms of energy production.

Even though the United Nations admits that not enough is being done to address the climate crisis and that there is no time to waste, it does not wield its power to make sure that effective actions are taken. Instead, as we wrote in 2014, the UN is dominated by global finance and corporations and their subservient governments pushing financial schemes and green technology to enrich themselves even when those projects don't solve the problem.

In this year's meeting, the major focus will be the rules for the newest form of a global carbon trading market mandated by the Paris Agreement. Carbon trading has been in existence since the Kyoto Protocol and has not reduced carbon emissions. California's cap and trade system, one of the largest in the world, is being copied by other countries, but ProPublica found that carbon emissions in California have risen by 3.5 percent under the program as it allows big polluters to purchase credits and even increase their emissions.

There have already been mass protests around the world leading up to the COP meetings. In expectation of more protests at the meetings in Spain, more than 5,000 police have been called out. Thousands of anti-capitalist activists, environmental defenders, and concerned citizens are arriving from all over the world to demand that countries take concrete measures to halt global climate change. The police are on high alert throughout the COP meetings until December 14.

This is the last year that the United States will participate in the United Nations COP meetings as Trump formally withdraws from the Paris Agreement. What are activists in the US to do?

Related Topic(s): Climate Change; Protest; Protest- Civil Disobedience, Add Tags
Add to My Group(s)
Go To Commenting
The views expressed herein are the sole responsibility of the author and do not necessarily reflect those of this website or its editors.