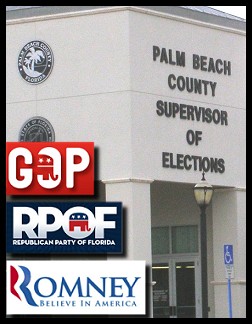 
The Republican Party of Florida's top recipient of 2012 expenditures, a firm by the name of Strategic Allied Consulting, was just fired on Tuesday night, after more than 100 apparently fraudulent voter registration forms were discovered to have been turned in by the group to the Palm Beach County, FL Supervisor of Elections.

The firm appears to be another shell company of Nathan Sproul, a long-time, notorious Republican operative, hired year after year by GOP Presidential campaigns, despite being accused of shredding Democratic voter registration forms in a number of states over several past elections.

According to the Center for Responsive Politics, Strategic Allied Consulting has been paid some $667,000 this year by the FL GOP, presumably to run its voter registration campaigns in the state. That number, however, does not account for another identical payment made in August. The Palm Beach Post is reporting tonight that the firm received "more than $1.3 million" from the Republican Party of Florida "to register new voters."

The firm is not only tied to the FL GOP, but also to the Mitt Romney Campaign, which hired Sproul as a political consultant late last year, despite years of fraud allegations against his organizations in multiple states.

Moreover, the firm is also reportedly operating similar voter registration operations on behalf of the Republican Party, to the tune of hundreds of thousands of dollars, in a number of key battleground states this year, including North Carolina, Virginia and Colorado. Strategic Allied has recently taken steps to hide their ownership by Sproul's notorious firm, Sproul & Associates.

Palm Beach County Supervisor of Election Susan Bucher confirmed to The BRAD BLOG late this evening that she turned over 106 suspicious voter registration applications to the Florida State Attorney during a meeting yesterday afternoon in Palm Beach, after the "questionable" applications were submitted to her office by a worker for Strategic Allied.

The forms were said to all have similar signatures, changed addresses and party affiliations, and other defects which appear to have all been done by the same hand.

The case emerging in Florida tonight mirrors a similar incident reported earlier this year when more than a thousand fraudulent voter registration forms were discovered to have been turned in to the Sacramento County, CA Registrar of Voters by a group hired by that state's Republican Party.

But that's not the only similar case, as a massive GOP voter registration scheme, which appears to involve the upper-echelons of the national party, begins to emerge...

(Image by Unknown Owner)   Details   DMCA
The Palm Beach Post reports tonight that Bucher turned the "questionable" applications over to FL State Attorney Peter Antonacci and Chief Assistant State Attorney Paul Zacks during a meeting on Monday in "an abundance of caution" after her staff "had questions about similar-looking signatures, missing information and wrong addresses on the forms."

The paper reports that "some of the applications she questioned were for new voter registrations while others were for address or party affiliation changes or requests for new voter cards."

According to the FL Election Code, the alteration of a "voter registration application...without the other person's knowledge and consent" is a third degree felony, punishable by a $5,000 fine and up to five years in jail.

Similarly, the willful submission of "any false voter registration information" is also a third degree felony. (Though don't tell fading GOP superstar Ann Coulter that, since she submitted fraudulent information on her own voter registration form -- in Palm Beach County, FL, coincidentally -- back in 2005, before knowingly voting at the wrong precinct illegally, as we have covered in great detail here over the years. See BradBlog.com/CoulterFraud for full documentation.)

The Post reports that "The 106 applications flagged by Bucher were part of a batch of 304 turned in Sept. 5 by the contractor, using the Republican Party of Florida's identification number."

Brad Friedman publishes Bradblog.com
Related Topic(s): ACORN; Democratic; Fraudulent Elections; Republican; Romney Weird Stuff; Vote Suppression; Voter Fraud; Voter Registration, Add Tags
Add to My Group(s)
Go To Commenting
The views expressed herein are the sole responsibility of the author and do not necessarily reflect those of this website or its editors.