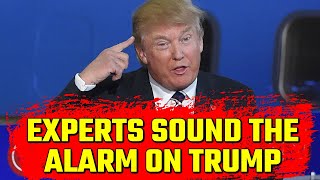 Let's give dangerous, dictatorial, corporatist, lawless, unstable, Donald Trump his due. He has shown us just how weak our various countervailing institutions and constitutional standards are in checking the excesses of the most impeachable President in American history.

After three and a half years of corruption, cronyism, chaos, illegal wars, and destruction of law enforcement protecting people from corporate ravages, Trump a bigoted, racist, serial fabricator, and boastful savage serial predator has not only gotten away with everything but has doubled down on everything. He has intimidated almost everyone with any power or influence into submission or silence.

This unprecedented feat rests on many abdicators:

1. Congress The most powerful constitutional branch is disgraced by the Republican controlled Senate led by the evil Mitch McConnell, a corporation masquerading as a human, bent on installing an autocratic judiciary entrenching the corporate state and blocking bills that may put the interest of the people above the business lobbies. Legislation ranging from omnicidal denial of climate disruption to living wage to universal health care and scores of other measures passed by the House dies in the Senate. He also goes along with everything Trump does like an opportunistic lap dog. By comparison, in 1974, Nixon was urged to resign by Republican Senators, including Barry Goldwater, over one count of obstruction of justice and one defiance of a Congressional subpoena submitted by the House. Trump renders those violations, including defying dozens of House subpoenas, in spades as a daily burst of continued law-breaking. "Moscow" Mitch and Trump have abandoned the people for the plutocracy.

In the House, Nancy Pelosi chose one impeachable offense (the Ukraine matter) out of a dozen ongoing, daily violations constituting "high crimes and misdemeanors" (See the December 18, 2019, Congressional Record H 12197). She could have had held public hearings on numerous continuing impeachable offenses containing "kitchen table" issues but rejected this consequential opportunity to make the Senate Republicans defend Trump in hearings that would have filled the news with his misdeeds and crimes. Trump now accurately believes that he has been inoculated by Congress from House investigations into his walking impeachment behavior daily.

The House didn't even exercise its plenary power to enforce subpoenas without having to resort to the courts and then endure years-long delays. Trump laughs when he is sued, having learned how to game and escape scores of lawsuits during his failed bankrupt business career.

Senate complicity and House cowardliness have damaged the constitutional status of this inkblot Congress in unforgiveable ways.

2. The Courts Increasingly Trumpitized, the federal courts are validating corporate powers and Presidential outlawry with five of nine votes on the Supreme Court. Before Trump, the courts approved extreme presidential powers by inaction, using the medieval English doctrine of "no standing to sue" or saying the case involved "political questions" between the White House and Congress. Other abdications secure dismissal due to "state secrets" in cases brought against the government or on vague assertions of "inherent" presidential powers.

3. The Democratic Party In duopoly politics, the public has to rely on the incumbent opposing party to check Trump. A thin reed indeed. Well-funded Democratic Congressional campaigns guided by Nancy Pelosi have lost four of the last five Congressional races to the worst Republican Party in history. Its anti-worker, anti-consumer, and fanatic determination to repeal environmental protections, that are opposed by a hefty majority of the citizenry is shameful. But Republicans are hungry for power and draconian in their unabashed voter repression and gerrymandering. In the last 20 years Republicans have captured a majority of state legislature and Governors, the Senate, and greater occupancy of the White House. As Republican Kevin Phillips wrote years ago, "the Republicans go for the jugular while the Democrats go for the capillaries." This party is incapable of introspection or revising or renewing its mission.

Most Democrats resent ideas from third party platforms and scapegoat the Greens or any other progressive party that advances new ideas. Election reversing Electoral College, costing the party two presidential elections in 2000 and 2016, induces no opposition. The civic drive called National Popular Vote grows without the Democratic Party's full backing.

Only Trump's madcap self-destructive performance gives the Democrats the edge. Without Bernie Sanders, the Democratic Party reverts to not having answers to the question: What does the Party stand for?

4. The Military Trump has cuffed them around, interfering in military discipline, firing their popular Secretary of Defense Jim Mattis. But he has given them more money than they asked for and flatters "the troops" at every turn. What's not to like? Only after Trump's belligerent misuse of the military to disperse a crowd of peaceful demonstrators did a few military leaders criticize the draft-dodging Bunker Boy Trump.

5. The Intelligence Agencies and the FBI No President has ever openly berated these agencies, fired officials, and changed their leaders, including the historically untouchable FBI, other than Trump. He also has fattened these budgets as he allowed their traditional missions except when they declined to support his personal vendettas. They swallow their pride and temper their anger.

6. The Mass Media It used to be that Presidents restrained themselves from attacking the media, apart from a few grumbles. Trump shouts, "fake news," and "enemy of the people." His large twitter following is his own media, along with Fox cable news and heal-clicking syndicated radio talk show soliloquists, Rush Limbaugh, Sean Hannity, Michael Levin, etc.

Related Topic(s): Climate; Corona Virus Coronavirus Covid-19; Corporate; Evangelical; History; Media; Military; Science; Trump; Trumpism, Add Tags
Add to My Group(s)
Go To Commenting
The views expressed herein are the sole responsibility of the author and do not necessarily reflect those of this website or its editors.