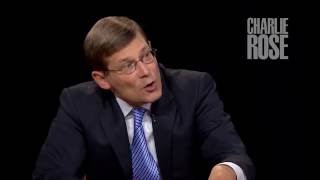 Former CIA Director Michael Morell sparked uproar when he said in an interview on Charlie Rose that Russians and Iranians should be killed in Syria. Was the provocative statement an effort to promote himself as the new CIA Director under Hillary Clinton?

Morell has proposed the US change tactics in Syria by targeting President Bashar Assad's allies, adding that killing Russians should be done covertly.

Two former CIA officials turned whistleblowers, Ray McGovern and John Kiriakou, appeared on RT's "Watching the Hawks" program to give their analysis on the disturbing comments, as well as other tantalizing bits of information.

RT (Tyrel Ventura):Morell was suggesting to kill Russian and Iranian people -- I'm assuming soldiers, even though he wasn't that specific -- as payback for their actions in Syria and Iran's actions in Iraq. Apparently Iran was providing supplies and armaments to the people we were fighting there during our occupation. Is this of strategy or tactics the norm or the oddity for the CIA in planning?

John Kiriakou:This is the exception. It's not the norm. Even under George W. Bush when the CIA wanted to initiate or institute a policy or program that would result in the killing of foreign nationals, my God, we went to the UN Security Council and asked for a vote. What Mike Morell is proposing is quite simply illegal. You just can't wantonly kill people because you don't like their politics. One of the important things that Mike Morell has forgotten or has chosen to ignore is that [Syrian President Bashar] Assad, whether we like him or not, is the internationally recognized leader of a sovereign country. And the Russian military has been invited into that country by its sovereign leader. So it's not up to us to decide we don't like that, and so we are going to start killing people because of it.

rt.com is Russian television, which actually does a great job reporting on US news too.
Related Topic(s): Bashar Al-assad; Iranian; Killing; Neocons; Russia; Syria, Add Tags
Add to My Group(s)
Go To Commenting
The views expressed herein are the sole responsibility of the author and do not necessarily reflect those of this website or its editors.