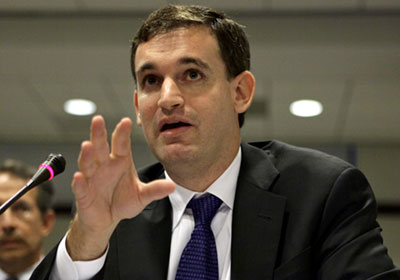 "With the first deadline looming for a new public-pension proposal to make the November 2014 ballot, a Texas nonprofit has emerged in a behind-the-scenes battle poised to break into public view next year.

"San Jose Mayor Chuck Reed, a Democrat pushing a controversial idea to dial down government retirement benefits, asked a Houston-based group (called Action Now Initiative) to give $200,000 to his local chamber of commerce last summer for 'policy analysis for statewide pension reform' according to a report Reed filed in August...

"A message left Wednesday with Action Now wasn't immediately returned, but it shares an address with the Laura and John Arnold Foundation, which was launched in 2008 by a former Enron executive and his wife. Its website lists a number of causes, including 'structural changes' to public pensions that are 'comprehensive, sustainable and fair.'"

Of course, the word "reform," is now the preferred euphemism for "rip off scheme." In the context of pensions, it means pleading poverty to justify cuts to public employees guaranteed retirement income, all while preserving massive corporate welfare and, in many cases, funneling pension cash to Wall Street hedge fund managers.

Related Topic(s): Abuse Of Power; Billionaires; Conservatives; Pensions; Retirement; Welfare, Add Tags
Add to My Group(s)
Go To Commenting
The views expressed herein are the sole responsibility of the author and do not necessarily reflect those of this website or its editors.