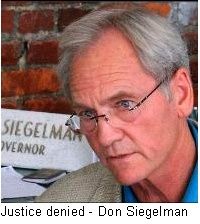 (Image by Unknown Owner)   Details   DMCA
Should Elena Kagan be approved as a justice to serve on the Supreme Court of the United States?

As it turns out there's a supremely simple method of testing her suitability. Once applied, citizens of any political persuasion will see that her nomination should be rejected outright.

As Solicitor General of the United States, Kagan argued against an appeal to the Supreme Court by former Alabama Governor, Don Siegelman in November, 2009. The Siegelman prosecution is viewed by many as one of the gravest injustices of the modern era, a purely political prosecution initiated by the Gonzales Justice Department.

Forty four former state attorneys general were so concerned that they issued a public petition on Siegelman's behalf in 2007. The petition to the United States House of Representatives urged prompt investigation of the many shady dealings in the Siegelman case, before, during and after his trial. They framed their petition in this simple sentence: "The U.S. justice system should be above reproach." It wasn't.

In 2009, ninety-one former state attorneys general filed a friend of the court brief supporting Siegelman's appeal to the Supreme Court. They argued, "clear legal standards are required to protect individuals from politically-motivated prosecutions based on conduct that is ingrained in our campaign finance system and has always been considered legal." That's a discrete way of saying Siegelman's prosecution and conviction was politically motivated.

Why are former Republican and Democratic attorneys general, top prosecutors, sending petitions of outrage about Siegelman's prosecutors? Has this ever happened before?

A review of the history and facts of the Siegelman case shows that through her support of the Siegelman prosecution, Elena Kagan is entirely unacceptable for any court concerned with the rule of law or the dispensation of justice.

Then Governor Don Siegelman sought his second term as Alabama's governor in 2002. He'd run a credible administration as Alabama's first Democratic governor in eight years. His opponent, Republican Bob Riley, represented the hopes of their party to restore dominance in Alabama. At the end of election night, Siegelman retained his office by just 3200 votes.

But local officials found a "computer glitch" that when corrected took 6300 votes away from Siegelman. The result was changed and Riley barely won the popular vote. The never demonstrated claim was that computerized memory devices used in optical scanner voting machines had malfunctioned.

When Siegelman demanded a recount of the optical scan forms used to generate the vote tally, the request was denied by then Republican Attorney General William Pryor. A recount would have been simple. Just tally the votes as marked on the optical scanner forms. But voting officials refused Siegelman's recount request, citing the state attorney general's advice that a recount would be illegal.

Related Topic(s): Criminal Justice; Dept Of Justice DoJ Crimes; Don Siegelman; Elena Kagan; Injustice; Justice Department; Richard Scrushy; Supreme Court SCOTUS, Add Tags
Add to My Group(s)
Go To Commenting
The views expressed herein are the sole responsibility of the author and do not necessarily reflect those of this website or its editors.

STAY IN THE KNOW
If you've enjoyed this, sign up for our daily or weekly newsletter to get lots of great progressive content.
Series: "Obama Administration"