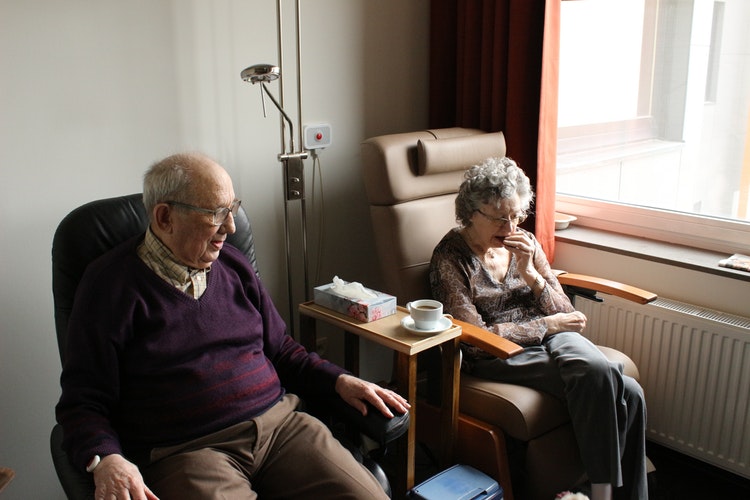 There are countless stories on the evening news about elders being abused while under the care of nursing home staff. Among these stories is the one of 89-year-old Hussein Younes , who was living in a nursing home following bowel obstruction surgery in 2015.

As he recovered in the facility, his family started seeing unexplained bruises and cuts on his body. Their solution? They set up a camera in his room and discovered that he was being slapped and thrown about by those who were there to help him recover. When the family confronted the facility, they released a statement that the treatment depicted in the video didn't coincide with the quality of care provided in the facility. Once the family saw the abuse, they removed him from the facility, but still received a bill for the time he was there.

Is this the care our elders deserve? Think of those people in your life who have shaped you into who you are today. Maybe it's a grandparent, great-aunt or uncle, or a mentor you had at work. Elders are all around and sometimes need extra care as they age. But, did you know that one in every 10 Americans over the age of 60 have been a victim of elder abuse ? Some reports estimate that nearly 5 million elders are abused yearly and up to 24.3 percent of residents in nursing homes experience at least one incident of physical abuse while in their care.

These numbers may surprise you. But even more so, they should anger you and make you wonder how we can change the trajectory before we move onto the next generation of elder abuse .

Elder abuse comes in various forms. Physical abuse occurs when they are hit, shoved, punched or restrained against their will. Emotional abuse happens when they are yelled at or threatened with the purpose of isolating or humiliating the elder. Of course, any vulnerable population is susceptible to sexual abuse or unwanted sexual acts as well. Other elders who live in nursing homes are simply neglected and just don't receive the physical and emotional care needed.

You may not know what elder abuse looks like. However, for most healthcare professionals, it's part of their job to observe for the signs of abuse. Formal care providers, such as nurses are mandatory reporters, which means that it's part of their responsibility to report any potential harm. This can make the occurrence of elder abuse in nursing homes and other facilities even more puzzling since the law mandates that our seniors are treated well or the abuser should be reprimanded.

Why Does it Happen in Nursing Homes?

You might think that elder abuse only happens in facilities that are of lower quality. However, it's critical to know that it can occur in any facility, regardless of how nice, clean, or expensive it might be. Individuals living in nursing homes are more vulnerable to abuse compared to those who live at home. Seniors with diseases like dementia, Alzheimer's, or those with limited mobility might not be able to tell others what's going on or remove themselves from the abuse.

In facilities across the country, nurses and nursing assistants are in short supply. Not having enough staff day after day can wear on the emotions and nerves of those who should be protecting our elders. This increased stress and understaffing scenario can create situations where those who never meant to abuse someone can strike out in frustration. It might also leave elders not receiving the care they need because there just aren't enough care providers.

How Can We Help?

No one wants to think about another person being abused or neglected. However, far too often, we choose to not speak about hard topics like elder abuse because it's uncomfortable. Here are a few things we can do to protect those who raised us:

Just because Trump permits abuse of the elderly in nursing homes, doesn't mean we have to agree or sit in silence. Whether you're educating your parents, friends, or your community, talking about elder abuse is an excellent way to raise awareness. You can also increase awareness by participating in World Elder Abuse Awareness Dayon June 15th.

Care for Your Elders

Growing older is challenging. As people age, they might suffer from sadness, depression, and isolation that can make them easier targets. Be sure to check on those you love and keep them active and connected. Isolation can lead to vulnerability.

Nursing homes and other healthcare facilities are supposed to be highly regulated. Any facility that receives government funding is required to be inspected periodically. However, sometimes the nursing home inspection process is full of corruption and fails to protect the residents.

Some states are fighting back and creating internal processes to protect the elders who live within their borders. WalletHub compared all 50 states and the District of Columbia on critical indicators of elder abuse and protection. They found that Massachusetts, Wisconsin, and Nevada have the best elder-abuse protections, while Wyoming and South Carolina were at the bottom of the list.

Another easy way we can help stop elder abuse is to offer support to care providers. If you know a nurse or nursing assistant who works in a long-term care facility, talk to them about the problems they see. Tell them how much you appreciate the care they give. A little support and compassion go a long way.

Setting up the Future

As we look towards the future, we must continue to fight for those who are less fortunate and more vulnerable than us. We must raise awareness, offer support, and expect more for the elders of America. Like they took care of us during our formative years, we must look after them. And, as we will likely find ourselves in care facilities in our senior years, taking action now will ensure better care in the future.

Indiana Lee lives in the Northwest and is deeply passionate about the society she lives in and the politics that make it up. She's always trying to figure out the true meaning behind the news stories and isn't satisfied until she feels she is (more...)

Related Topic(s): Abuse Of Power; Elderly Care; Elderly-Seniors; Future; Seniors, Add Tags
Add to My Group(s)
Go To Commenting
The views expressed herein are the sole responsibility of the author and do not necessarily reflect those of this website or its editors.

HIPAA & Privacy: What You Need to Know to Stay Safe

Elder Abuse at Nursing Homes: What Can We Do to Stop It?