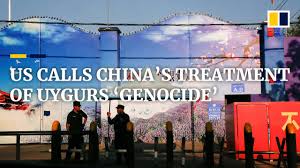 The liturgical readings for this Sunday are about designated enemies often being readier to recognize and respond to divine wisdom than are believers who consider themselves God's People.

Accordingly, the selections present the mind-blowing discovery of the reluctant chauvinist prophet Jonah (he of belly-of-the-whale fame) alongside the habitual people-centered attitude of the courageous universalist prophet Yeshua the Christ. Together, the readings' call is to open ourselves to the wisdom and goodness of despised foreigners and the non-elite.

That theme (explained below) reminds me of China and its bipartisan vilification by U.S. politicians and mainstream media. Like the Ninevites in today's first reading, China has gradually and unquestionably become the enemy du jour as described not only by outgoing Secretary of State, Mike Pompeo, but by his incoming counterpart, Antony Blinken.

The Case of China

Like Jonah's assessment of Nineveh, neither can say a good word about China, even though (according to western polls) its government enjoys something like 90% approval by the Chinese people. (Furthermore, according to Dorinda Elliot of the China Institute, rather than diminishing its popularity, the government's success in dealing with Covid-19 has made it more popular than ever.)

Still, on his way out the State Department door, Mr. Pompeo denounced China not only for stealing western intellectual property, but for its policies on Muslims and ethnic minorities in its western Xinjiang region. According to Pompeo, those policies constitute "crimes against humanity" and "genocide."

In his testimony before the U.S. Senate, Antony Blinken fully agreed with Pompeo's assessment. Both painted China as an enemy rather than a hugely successful competitor with whom our country might well cooperate and from whom we might learn. Relative to crimes against humanity, both Pompeo and Blinken ignore the facts that their own country's policies:

Despite all of that, Mr. Blinken had the temerity to criticize China's use of reeducation camps as its particular method of dealing with Muslim terrorist threats rather than "our" method of endless wars, bombings and drone strikes. (In Iraq's illegal war, such U.S. measures have taken the lives of more than 1 million people -- with no official mention of genocide or crimes against humanity.)

Moreover, Pompeo's and Blinken's denunciations ignore the facts that China's system of political economy has (in Jonah's terms) "repented." It has self-consciously departed from the inefficient and destructive ways of capitalism-as-we-know-it. Yes, China's way involves a large free-market sector. But a huge part of its economy is under direct government control. The results of that combination have been astoundingly successful.

Moreover, according to economist Richard Wolff, accusations against China's alleged stealing of intellectual property are nonsensical. According to Wolff, the transfer of intellectual property was part and parcel of the bargain long since struck between U.S. companies and the Chinese government when those companies were given access to Chinese labor and the country's markets. On China's part, the agreement was: we give you access to our market and cheap labor; you share profits with us and give us the right to reverse engineer your technology. It was an at least implied quid pro quo agreement that everyone understood.

The result was the Chinese Way that enjoys huge success not only internationally, but domestically. According to Bloomberg News, the Chinese economy is set to grow by 2.5 percent this fiscal year, despite the ravages of Covid-19.

In other words, Chinese "repentance," its unprecedentedly rapid response (in just over 40 years) to the needs of its people, has saved it from the destruction our version of capitalism has arguably made inevitable for us. Like the prophet, Jonah, our politicians and business elite don't want to hear any of that.

As I've been saying here, all of this is closely connected with today's readings. In the first selection, the Spirit of Life sends Jonah to learn from Nineveh, Israel's archenemy. He's completely surprised to discover that the Ninevites, like China, are more responsive to the way of Yahweh than Jonah's own people.

Similarly, in today's Gospel selection, Jesus departs entirely from conventional wisdom. He selects illiterate workmen (rather than temple priests or members of his country's elite) as recruiters for his Kingdom of God Movement bent on creating a world governed by divine principle rather than Caesar's brute force.

Related Topic(s): China; Genocide; God; Jesus; Muslims; Prophet; Sunday; Wisdom; Xinjiang, Add Tags
Add to My Group(s)
Go To Commenting
The views expressed herein are the sole responsibility of the author and do not necessarily reflect those of this website or its editors.