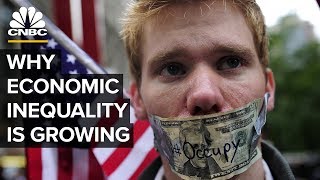 The Inequality Gap Is Growing Between Rich And Poor
(Image by YouTube, Channel: CNBC)   Details   DMCA

During the last 45 years there have been a lot of campaign promises made by candidates, a lot of political party platforms, a lot of great speeches and a lot of important pieces of legislation passed.

But, at the end of all of that, we have to ask ourselves some very simple questions that are too rarely asked.

Why, despite huge increases in technology and worker productivity, is the average American worker today in real, inflation-accounted-for dollars earning no more than he or she did in 1974?

Why are half of our people living paycheck to paycheck, with no money in the bank and scared to death that their car might break down or that a family member could end up in the hospital?

Why, in the last 30 years, has there been a massive transfer of wealth from the working families of this country to the very rich, with the top 1% seeing its wealth increase by $21 trillion while the bottom half saw a $900 billion decline in its wealth?

Why, for the first time in the modern history of our country, is the younger generation experiencing a lower standard of living than their parents with more debt, lower wages and less home ownership?

Why, in the wealthiest country in the history of the world, do we have more people incarcerated than any other nation?

Why are we the only major country on earth not to guarantee health care to all, while we pay by far the highest prices in the world for prescription drugs?

Why will 500,000 Americans sleep out on the streets tonight while millions of others are paying 40 or 50 percent of their limited incomes for housing?

And here is the reason why.

Unfettered capitalism works extraordinarily well for the very rich and powerful special interests, while it is a disaster for ordinary Americans. While the billionaire class becomes richer, tens of millions of Americans are unable to afford the basic necessities of life decent food, shelter, housing and education and many are going deeper and deeper into debt.

What differentiates our campaign from all others is the understanding that real change in this country will not occur unless we have the courage to build a political revolution; unless millions of people stand up and take on the greed of the powerful special interests that control so much of our economic and political life.

We must not only win this election. We must build the kind of powerful grassroots movement that can bring transformative change to the country.

Together, we must finally confront the power structure of this country whose greed has done so much harm to the economic and moral fabric of America.

Related Topic(s): Capitalism; Economic; Election; Housing; Inequality; Medicare; Rich People, Add Tags
Add to My Group(s)
Go To Commenting
The views expressed herein are the sole responsibility of the author and do not necessarily reflect those of this website or its editors.