I'm sure not going to make any friends among the French side of my family, by writing this post. They have roots in Normandy and have been coming to Arromanches les Bains for summer vacations for four generations. This is the small village where Allied troops arrived on D-Day, June 6, 1944, with their celebrated floating port, that was shipped over from England and built on site, to bring in all the materiel needed for the invasion. The family house we are staying in was billeted as the Allied post office and we can see the landing beach from it. On the paternal side, the other house here was taken over as a military command, since it looks right out over the water, where the port was built. Needless to say, my attachment to D-Day is above average.

The landing was a daring, brilliant operation, getting high marks as a feat of engineering, while thousands of US, British and Canadian soldiers died during the invasion. Arromanches just celebrated the 75th anniversary of the landing, with US President Donald Trump and British Prime Minister Theresa May joining French President Emmanuel Macron, just 100 meters from where I am writing this article. 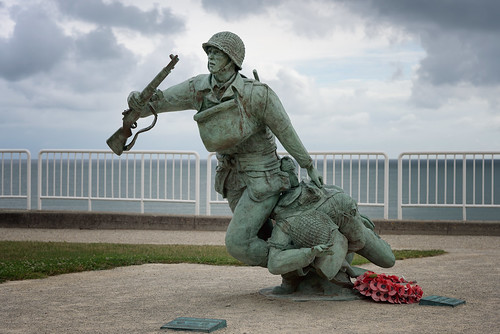 So far, so good. But, Russian President Vladimir Putin was snubbed, as was Chinese President Xi Jinping. Russia always invites Western leaders to attend Victory Day in Moscow, every May 9th and since 2015, when V-Day in China is honored on September 3rd (HERE). Western leaders continue to refuse to participate in these events, which is a sad statement, indeed, about the arrogance and racism of empire. To do so would be to admit the truth: Allied forces did not liberate Europe and Asia from global fascism. The Soviet Union (Russia) and China did.

Yes, thousands of Allied soldiers died during World War II and with them, a total of 966,000 people were lost among the Five Eyes allied countries: the US, Britain, Canada, Australia and New Zealand (HERE). At the same time, Russia and China each lost no fewer than 25,000,000 citizens, a total of 50 million, with credible research showing they each lost closer to 35 million compatriots, or 70 million total. Even at the lower figure, Russia and China lost 50 times more people than the allied countries together. Put another way, the Allies lost 2% as many people as Russia and China combined.

More statistics reveal hard truths that totally demythify Western propaganda. In June 1944, when the Allies landed outside my window, Germany had 228 divisions of troops, with 150 in Germany, 66 on the Eastern Front and 12 on the Western (French) Front. You can do the math. This means that the D-Day landing was doing battle against only five percent of the Wehrmacht's forces (HERE). This, while the Soviet Red Army was grinding Nazis into dog food, on its relentless drive towards Berlin.

It's the same story in the Pacific, about which I wrote in The China Trilogy (see below). Mao Zedong and the People's Liberation Army (PLA) were fighting three enemies simultaneously: fascist Japan, fascist Chiang Kai-Shek's Guomindang (GMD, oftentimes noted as KMT) and imperialist United States. Western propaganda likes to censor the fact that the US gave GMD billions of dollars in weapons, materiel and training, with 100,000 red-white-and-blue military personnel fighting side-by-side with them, along with many remaining Japanese troops, trying to exterminate the unstoppable Chinese Communist revolution.

Before Japan's surrender on September 3rd, 1945 to China, the United States in the Pacific theater was fighting only 18% of the Japanese Imperial Army. The other 82% were bogged down in China and Japan, thanks to Mao Zedong's and the PLA's heroic efforts to free their people from foreign terrorism and the West's illegal drug cartel destroying the Chinese people.

The Allies had a hell of time fighting against only 5% of Germany's might in France and the US had its hands full fighting 18% of Japan's forces. Let's be honest, if it weren't for the Russians and Chinese killing the vast majority of fascist Axis troops, and dying themselves by the tens of millions to reach victory, it's highly unlikely the Allies would have gotten very far against a bigger force in the two theaters. In both cases, the Allies got into World War II when Russian and Chinese victory was already a foreseen conclusion.

What we can say is that the Allies prevented the Soviets from invading Japan, which they were preparing to do, and they stopped the Red Army in Germany, instead them being able to finish off the Wehrmacht in France. The Allies can take credit for reducing Stalin's negotiating chips by five countries, France, Belgium, Holland, Luxembourg and Lichtenstein, but that's about it. Germany and Japan would have still lost against the Russians and Chinese, without any Allied participation. These sobering truths are vehemently refuted and censored behind the Great Western Firewall, but are undeniable.

Truman's atomic bombs that incinerated two cities' worth of civilians, Hiroshima and Nagasaki, were not the reason the Japanese emperor surrendered to the United States on August 14th, 1945. Starting on March 9th of that year, and before using nuclear weapons, the United States incinerated 67 Japanese cities by fire bombing. Millions of women, children and elderly were burned to death, while causing many more millions to be homeless and dying of starvation. Still, the emperor did not call it quits. This, while the United States repeatedly refused Japan's requests to negotiate a surrender. Hiroshima and Nagasaki were simply cities number 68 and 69 to be pulverized into non-existence, along with 200,000 innocents turned to dust. De'jà vu. Tokyo lost 100,000 on March 9th, as many as each of these two A-bombed cities, and millions more were slaughtered in between. The fact that the Japanese knew the two A-bombs were different than the 2,000,000 high-explosive and 5,000,000 incendiary bombs that had already destroyed the country was of no consequence to them (HERE).

Related Topic(s): D-day, Add Tags
Add to My Group(s)
Go To Commenting
The views expressed herein are the sole responsibility of the author and do not necessarily reflect those of this website or its editors.