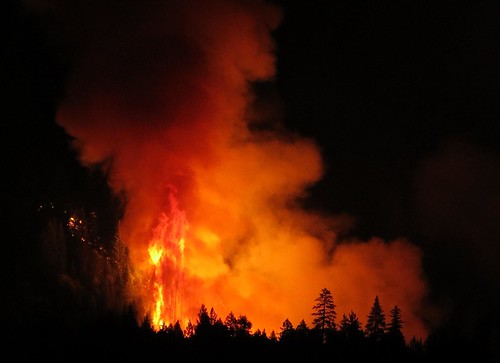 The raging fires and toxic smoke clouds pouring through Northern California can only be described as apocalyptic.

Were they sparked by Pacific Gas & Electric's centralized grid?

And where are our federal government and national media?

More than 40 people are dead; many more are missing. Given how fast the fires raced through the region, it's possible that other humans -- as well as farm animals, pets and wildlife -- have been incinerated.

In many cases, the margin for escape was five minutes or less. Some people who did not leave their homes at the first sign of danger died. Some stood in home swimming pools for hours while everything burned around them. Flames leaped over Highway 101 and other major roads, creating firestorms with temperatures of 1,200 degrees Fahrenheit and more.

Much of the quiet, comfortable town of Santa Rosa now looks like Hiroshima after the atomic bombing. Whole neighborhoods have been reduced to smoldering ash. Homes, businesses, factories, farms -- some 5,700 buildings to date -- plus gardens, vineyards, cars and forests have been vaporized.

The death toll is high, the dollar values incomprehensible. Hundreds of square miles of some of the world's most vital, lush terrain have been obliterated.

Much of the fallout is now entering the lungs of some 7.6 million Bay Area residents.

The cloud recalls the dust and ash that coated New York City after the 9/11 disaster. The Environmental Protection Agency failed to evacuate Manhattan and did not warn area residents to wear protective clothing and masks. Years later, its then-chief, Christine Todd Whitman, issued a public apology.

That cloud contained arsenic, lead, mercury, zinc, cadmium, creosote, furans, dioxins and much much more -- a devil's brew of toxic chemicals perfectly designed to kill a large number of beings over the short and long term.

The cloud now swirling over the Bay Area and Northern California contains huge quantities of wood smoke, which can be toxic. Health authorities have warned people to stay inside and to be especially protective of their children and elders.

Bay Area residents have been urged to wear masks, but hospital-grade masks don't filter out particulate matter. The heavier-duty N95 masks might help, but existing supplies have sold out. The idea for FEMA or the military to take in supplies of more effective protective gear seems never to have occurred to federal authorities.

Protective gear will be an issue during the cleanup, as toxic ash and other chemical residue will coat debris throughout the region.

Mark Sommer, a Bay Area author and renewable energy advocate, noted that thousands of people fled to shelters in Napa and Sonoma Counties.

Related Topic(s): California Fires; Disaster; FEMA; Pacific Gas And Electric, Add Tags
Add to My Group(s)
Go To Commenting
The views expressed herein are the sole responsibility of the author and do not necessarily reflect those of this website or its editors.