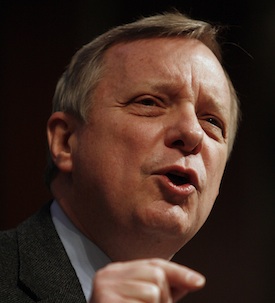 He further says that Obama's plan as outlined in his speech last Wednesday is "the other side of the spectrum" from Rep. Paul Ryan's plan, and should be considered the left side of the debate. While being left of Ryan, the Obama plan is by no means the "other side of the spectrum." It's been correctly called "center right" by Paul Krugman, and "a rather conservative one, significantly to the right of the Rivlin-Domenici plan" by the Center on Budget and Policy Priority's Bob Greenstein. This isn't going to be good.

"You have the House Republican budget from Congressman Paul Ryan, who I know and like, which is going to be placed somewhere on the right side of the spectrum. You have the president's suggestion, which will be on the other side of the spectrum. And if and when we reach an agreement, it will be in the middle, a bipartisan effort, which I think has a chance to succeed," Durbin said in an interview for ABC News' "Subway Series."

He gets a good kick in at Sen. Bernie Sanders, who has legislation -- cosponsored by Majority Leader Harry Reid -- to keep Social Security out of the budget negotiations. It's a "sense of the Senate"-type resolution, a marker put down politically, but not actually binding on the body or with the force of the rule of law. Nonetheless, Durbin says, "I think Bernie is going too far with his language."

"In 2037, as we know it, Social Security falls off a cliff," he said. "There's a 22-percent reduction rate in payments, which is really not something we can tolerate. If we deal with it today, it's an easier solution than waiting. I think we ought to deal with it. Many of my colleagues disagree, put it off to another day. But from my point of view, leaving it out makes it easier politically, including it, I think, meets an obligation, which we have to senior citizens."

One specific change Durbin said should be considered right now is reducing Social Security benefits to the wealthy.

Durbin is simply not telling the truth there. Social Security does not "fall off a cliff" in 2037. With no intervention, it could pay out 75% of benefits beginning in 2037. Not ideal, but not off a cliff, either. The means testing he's considering "right now" wouldn't actually save the program much at all. There actually aren't that many wealthy seniors, maybe two percent of the over-65 population, and the administrative costs to the SSA involved in making income determinations, measuring need, and policing the system would be significant. The only thing it would achieve would be to turn Social Security into welfare, leaving it badly damaged and ready for the next big political hit.

There are some very serious issues with Durbin being the messenger of doom for progressives on this. First, framing the Obama proposal as the left pole in negotiations, meaning that any truly progressive budget approach is shoved out entirely, irrelevant. The other problem is that Durbin is Obama's closest ally in the Senate, and that the Obama administration is to some extent involved with the Gang of Six negotiations. National Economic Council Director Gene B. Sperling has spoken with them. The extent to which Durbin is paving the way for the administration to back cuts to Social Security -- achieving that Grand Bargain -- is as of yet unclear, but the possibility cannot be ruled out.

All of which is so mind-numbingly politically stupid it's hard to believe it's coming out of Durbin's mouth. Supposedly, Obama and the Dems are planning on hinging the 2012 election on bashing the GOP for their proposed Medicare plan. That issue is blown out of the water if Social Security cuts happen on the Democrats' watch. Bad policy. Bad politics. Disastrous for America's middle class.

Related Topic(s): Bipartisan; Dick Durbin; Republican; Social Security; Welfare, Add Tags
Add to My Group(s)
Go To Commenting
The views expressed herein are the sole responsibility of the author and do not necessarily reflect those of this website or its editors.