This is an email I received this morning which looked interesting enough to pass on... 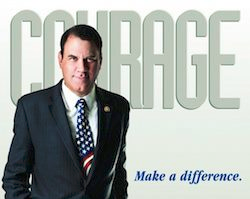 You can't save the world alone. But now, you don't have to try. Help has arrived, and it's called "Democrats for Change"!

For a long time, not just here but all over the country, greedy, ruthless people have been calling the shots. But now, some progressive activists have come up with a plan to empower citizens like YOU, to fight back.

Democrats for Change is recruiting ordinary people who share progressive American values to serve as block captains, mayors and council members, county officials and even in Congress.

If you are willing to serve your community, Democrats for Change activists will show you how to get on the ballot, identify the voters who may support a progressive like you, and make sure those voters vote, starting in the June 5 Democratic primary election.

The alternative is the all-to-familiar status quo -- ceding power to tired, complacent or corrupt politicians who have been utterly ineffective against the onslaught of Donald Trump Republicans, and billionaires like the Koch Brothers.

I know those feckless Democrats-in-name-only all too well. The kind of Establishment Democrats who were wringing their hands and clutching their pearls when I explained on the House Floor that the GOP health plan was 'Don't get sick, and if you do get sick, die quickly.' They won't rock the boat, when we're fighting for our lives and our future.

America desperately needs leaders with a head and a heart -- like YOU -- but the halls of power are populated by dirt-sucking bottom-feeders.

We need progressive champions in our government, instead of political insiders who are merely faking resistance. If you agree, then take action by joining Democrats for Change. We are true-blue Democrats, not feckless appeasers.

There's still a lot to be done over the coming weeks. Let's do it together. Seize the day; seize the future.

P.S. Democrats for Change would love for you to be an active participant, and even run for office yourself, but if you absolutely cannot volunteer your time, please chip in $5, or whatever you can afford, to help elect progressive champions who run on the Democrats for Change ticket!