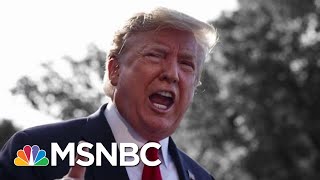 Donald Trump Says You Can't Impeach Him Because 'There Was No Crime'
(Image by YouTube, Channel: MSNBC)   Details   DMCA

Many Americans have forecasted that the outlaw Donald Trump will commit even more illegal acts to increasing his support in the 2020 presidential year. Remember Wag the Dog, a film about using a fabricated war to draw attention away from presidential misdeeds. Those Americans have been proven right by Donald Trump's attempt to provoke an unlawful war with Iran. Likewise, Trump has illegally ordered his staff, or ex-staff, to ignore Congressional subpoenas to testify and provide documents.

As the most impeachable president in American history, Trump continues to shred our Constitution and its critical separation of powers. Trump has repeatedly, brazenly seized Congressional authority in an attempt to turn the presidency into a monarchy. Trump once went so far as to say, "I am the chosen one."

Unlike Nixon, who slinked away because of the Watergate scandal, every day Trump is providing more evidence to the Congress about his impeachability. He never stops. He never expresses remorse or apologizes for violating the Constitution or federal criminal statutes, such as the Antideficiency Act. Likewise, Trump has shown no respect for international treaties to which the U.S. is a solemn signatory.

Trump's mantra of usurpation is clear. He declared that because of Article II of the Constitution, "I have the right to do whatever I want as President." Trump seems to have neglected Article I, which gives Congress the exclusive authority to declare war, to appropriate funds, and to conduct investigations of the Executive branch with the plenary authority, i.e. issue and enforce subpoenas. Congress is the primary branch of government, not a co-equal branch.

Trump has refused to turn over his tax returns, unlike previous presidents who released them every year. Trump has much to hide in terms of entanglements with foreign entities. He is a walking violation of the Emoluments Clause (Article I, section 9, paragraph 8), which prohibits any president from profiting from foreign interests. Trump profits when foreign dignitaries patronize his hotels and other properties.

The Constitution requires Trump to faithfully execute the law. Instead he is destroying health, safety, workplace, and environmental laws through his corrupt henchman. The Trump regime is dismantling congressionally mandated federal agency law enforcement programs and, in so doing, is removing lifesaving protections. At the same time, Trump is corruptly raising money from the corporate interests that want to dismantle these agencies, from Wall Street to Houston's oil barons.

The most morally distinguishing impeachable offenses come under the heading of what Alexander Hamilton called "abuse of the public trust."

Consider these abuses of the public trust:

Trump should be impeached and convicted. If the supine Republican-controlled Senate fails to convict Trump, the voters should landslide him in November.

It is almost as if Trump looks to setting records in how many parts of the Constitution he can violate. He interceded with the Prime Minister of Israel Benjamin Netanyahu to prevent two members of Congress visas to Israel. Trump's actions prevented these members of Congress from exercising their oversight responsibilities under the Speech and Debate Clause (Article I, section 6, clause 1). No president has ever dared such an intervention.

For the elaboration of 12 impeachable counts under one major Article, see the letter by me, constitutional law experts Bruce Fein, and Louis Fisher in the Congressional Record (December 18, 2019, page H 12197).

Speaker Pelosi must add some of these impeachable offenses, backed by constitutional law specialists, or Trump will trumpet that though she had the votes to do so, she didn't because they are "fake, lies." Exonerating him will prove to be a devastating precedent for future presidents behaving similarly, as the standards for presidential behavior keep dropping lower and lower into lawless immunity and impunity..."

Related Topic(s): Democrats; Impeach Trump; Impeachment Hearing; Republican; Trump Presidency; Trump Threats, Add Tags
Add to My Group(s)
Go To Commenting
The views expressed herein are the sole responsibility of the author and do not necessarily reflect those of this website or its editors.