By Noam Chomsky and Wallace Shawn

In an interview with Wallace Shawn, Noam Chomsky explains how elitism and atomization have created political rifts. 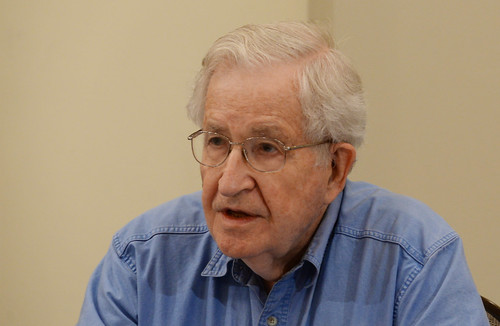 Building on a friendship initiated in Sandinista Nicaragua of the 1980s, Wallace Shawn a committed activist but someone who is best known as an accomplished dramatist and actor interviewed scholar and linguist Noam Chomsky. In their discussion, Shawn reflected on Chomsky's words and called on him to address the ever-challenging question: how do we convince the people who were not in the room to care, to take action, given the scope and urgency of our current political crises?

There is a very interesting book that just came out by Arlie Hochschild, a sociologist, who went to a pretty terribly impoverished area in Louisiana and lived there for six years and studied the people sympathetically. This is deep Trump country, and her results are quite interesting. For example, these are people who are being devastated by chemical and other pollution from the petrochemical industry, but they are strongly opposed to the Environmental Protection Agency.

When she asks why, they have reasons. They say, "Look, what is the Environmental Protection Agency? It's some guy from the city with a Ph.D. who comes out here and tells me I can't fish but he doesn't go after the petrochemical industries. So, who wants them? I don't want them taking away my job and telling me what I can do and speaking to me with the cultivated accents meanwhile I'm under attack by all this stuff."

from wikipedia: Noam Chomsky (official website)  is an American  linguist ,   philosopher , [4][5]   cognitive scientist , and   activist . He is an   Institute Professor   and Professor ( Emeritus ) in the Department of Linguistics & Philosophy at   MIT , where he has worked for over 50 years. [6]   Chomsky has been described as the "father of modern linguistics" [7][8][9]   and a major figure of   analytic philosophy . [4]   His work has influenced fields such as computer science, mathematics, and psychology. [10][11]

Chomsky is credited as the creator or co-creator of the Chomsky hierarchy, the universal grammar theory, and the Chomsky--Schutzenberger theorem.

Ideologically identifying with anarchism and libertarian socialism, Chomsky is known for his critiques of U.S. foreign policy[12] and contemporary capitalism,[13] and he has been described as a prominent cultural figure.[14] His media (more...)

Related Topic(s): Activism; Class Politics; Decadence; Policies; Trump; Working Families; Working Poor, Add Tags
Add to My Group(s)
Go To Commenting
The views expressed herein are the sole responsibility of the author and do not necessarily reflect those of this website or its editors.

Chomsky: America's Rank Hypocrisy -- Why Is it Only an "Atrocity" When Other Countries Do It?

Noam Chomsky: Only One Thing Will Make Israel Change Course

Requiem for the American Dream