Here's a quick summary of how U.S. politics has evolved over the last 50 years, according to a massive analysis of exit polling data conducted by economist, Thomas Picketty. 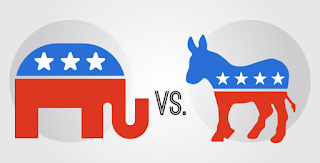 Massive income growth by the wealthiest citizens and changing patterns of wealth accumulation at the top of the scale created a new, high education/high wealth class of elites on the political left. Their power and special interests realigned the priorities of the Democratic Party and shifted focus away from those on the lower end of the economic scale. For over 20 years Democratic candidates for election barely ever mentioned America's poor. This is especially true for America's rural poor. With neither party representing the interests of the working class or the poor, these citizens became disaffected and radicalized against elites in both parties, and also against the federal government in general. This gave rise to the Tea Party movement. A vast swath of the Democratic base switched allegiance and became the radical Republican base we have today.

To attract and hold on to these radicalized low wealth/low education voters the industrialist elites have funded and vastly expanded the alt-right media machines to appeal to their radical base. They also pushed radical policies to appease and manipulate their new base. The Republican party today would not have enough members to be a national party if this shift had not taken place.

So, this is how United States politics stands nearly 20 years into the 21st Century. On the Right, we have a radicalized Republican Party comprised of the same ultra-wealthy industrialists at its core. But today they have created this subversive coalition of traditional conservatives and a pantheon of disaffected, low education/low wealth former Democrats. These voters at the lower half of the economic scale include a disparate collection of alt-media radicalized single-issue voters, fringe groups, hate groups, and the disaffected rural poor. All of these groups have otherwise unpopular goals, which the traditional party elites exploit by pushing a radical Republican agenda that is harmful to a majority of Americans, but not to their own bottom line.

On the left, we have a modulated Democratic Party unwilling to challenge the influence and power of the ultra-wealthy, left-leaning elites whose economic interests are best served by maintaining the status quo. The Party is no longer the champion of the poor and marginalized citizens that it once was. The party fauns over the "middle-class" (the upper 40% on the economic scale) in order to hang on to them while strategically ignoring the poor and working class that once formed its base. Instead, it panders to its former base voters without actually pushing an agenda that would improve their lives.

It is for these reasons that Picketty draws the conclusion that a centrist Democratic candidate for President may be a losing strategy. A centrist who tries to thread the needle between ultra-wealthy elites on the left, and the poor and working classes at the base, will neither energize progressives at the bottom of the income scale nor win over the disaffected voters who have turned to the Republican Party to make themselves heard. It is against these new political realities that Democratic progressives must come to terms before it is too late.

Related Topic(s): Government; Party Politics Republican; Republican; US Politics-Government, Add Tags
Add to My Group(s)
Go To Commenting
The views expressed herein are the sole responsibility of the author and do not necessarily reflect those of this website or its editors.