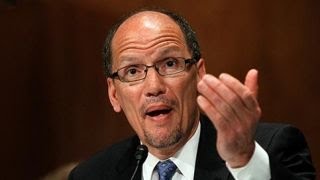 Sometimes a party's leader seems to symbolize an enduring malaise. For Democrats in 2018, that institutional leader is Tom Perez.

While serving as secretary of labor during President Obama's second term, Perez gained a reputation as an advocate for workers and civil rights. That image may have helped him win a narrow election among Democratic leaders to become chair of the Democratic National Committee, with the backing of Hillary Clinton loyalists eager to prevent the top DNC job from going to Bernie Sanders supporter Rep. Keith Ellison.

Perez's leadership of the DNC during the last 11 months has been mediocre or worse. The problems go far beyond administrative failings, lack of inspirational impacts or shortcomings in fundraising. His mode of using progressive rhetoric while purging progressives from key DNC committees reflected a pattern.

At the top of the DNC, the Clinton wing's determination to keep the progressive base at arm's length has not abated -- while, at the same time, the DNC proclaims its commitment to the progressive base. The contradiction exists because of Democratic Party priorities revolving around corporate power.

To align the DNC with a grassroots base that is notably more progressive and has enormous energy to challenge Wall Street and the oligarchy, it would be necessary to welcome that energy instead of trying to keep it at bay.

Rhetoric aside, the DNC leadership is hardly oriented to challenging the corporate domination that imposes so much economic injustice. Some disturbing indicators of the current chair's orientation can be found in his Obama-era record as an assistant attorney general as well as head of the Labor Department.

"Before Tom Perez was Labor Secretary granting waivers to indicted banks, he was at the Justice Department not prosecuting Steve Mnuchin for illegally foreclosing on active duty troops," financial specialist Matt Stoller pointed out in a recent tweet.

A former budget staffer on Capitol Hill, Stoller wrote an investigative report last February for The Intercept that laid out in detail how Perez refused to confront the criminal actions of large banks and their top executives during his eight years at the Justice and Labor departments. Stoller noted that "the reluctance to take on Wall Street has been a hallmark of the modern Democratic Party -- and has served as an electoral headwind up and down the ticket."

And, Stoller wrote, Perez "represents the finance-friendly status quo that has relegated Democrats to minority status."

During the electoral tailspin of 2016, Perez was all in with Clinton's battle against Sanders. On Feb. 5, 2016 -- just after Clinton had squeaked through the Iowa caucuses -- Perez sent an email to Clinton campaign chairman John Podesta, looking ahead to the imminent primary in New Hampshire and caucuses in Nevada. Reporting that "I was in NH on Sunday and Nevada on Monday and Tuesday for HRC," Perez offered advice on how to counter the Sanders campaign, such as trying to promote a narrative that "Bernie does well only among young white liberals."

Perez closed his email memo to Podesta with a reference to the next Clinton-Sanders debate: "Let me know how I can be of further assistance. I believe I am heading to Milwaukee next Thursday to help with debate spin."

These days, two years later, Perez is publicly voicing strong support for the recommendations of the DNC's Unity Reform Commission, which has called for some important steps toward a more democratic Democratic Party -- including a 60 percent reduction in unelected superdelegates for the 2020 national convention. Yet we don't know what Perez is privately saying to fellow Clinton loyalists on the Rules and Bylaws Committee that is now very slowly taking up those recommendations.

Perez had seen to it that this key committee would be bereft of Sanders supporters. There are signs that the committee is slow-walking the recommendations toward a watered-down morass -- which progressives should demand must not happen.

While, in recent days, progressive outrage has been rightly focused on the cave-in of Democratic "leadership" in the Senate during the brief government shutdown, the stasis of the DNC sank further into the shadows when the Rules and Bylaws Committee adjourned a two-day meeting on Jan. 20. It appears that even the compromise reforms painstakingly hammered out by the party's Unity Reform Commission for the better part of 2017 are in jeopardy.

Related Topic(s): Fundraising; Metaphor; Party Leadership; Progressives; Tom Perez, Add Tags
Add to My Group(s)
Go To Commenting
The views expressed herein are the sole responsibility of the author and do not necessarily reflect those of this website or its editors.