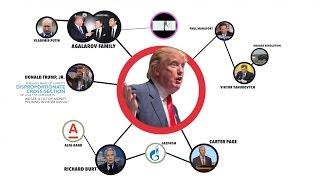 "The Russia House" was a 1990 movie starring Sean Connery in his post-James Bond mature period. Moviefone summarized the plot as follows:

"While visiting Moscow, British publisher Barley Blair (Sean Connery) learns of a manuscript detailing the Soviet Union's nuclear missile capabilities. British intelligence and the CIA consider the book to contain crucial information and recruit Blair to investigate its editor, Katya Orlova (Michelle Pfeiffer). As Blair learns the origin of the manuscript and discovers Russian military secrets, he falls in love with Katya and fights to protect her family."

I did see the movie, for I have been a big Sean Connery fan since he hit the big time in that very first James Bond film, "Dr. No." I don't recall much of it, but it did involve spycraft, Moscow, the Soviet and British secret services, and, of course, romance.

And so, what do we have here, in "L'Affaire Trump/Russe?" (which may be as fictional as "The Russia House" was, or then again, maybe not). We have spycraft for sure, in the person of the former British secret service member Christopher Steele. He may or may not be telling the truth, but a) his reportage has been verified by various European secret services and b) at one time the FBI planned to retain and pay him for his services. (This is the same FBI that worked hard in an attempt to prevent the election of Hillary Clinton.) Then there's the nuclear weapons angle, for the Russians are apparently in the process of modernizing theirs (whatever that means) and Trump would like to do the same for the U.S. nuclear arsenal. Then there's the seamy side of the Steele "dossier" which would introduce a touch of sex, if not romance, into the plot.

And finally, there are the two leading men. Trump likely regards himself as a James Bond type, at least when he is dealing with the ladies (and of course, for Trump, with his legendary attention span, it would very easy for him to confuse Sean Connery and James Bond, just as Ronald Reagan actually visualized himself participating in the liberation of a Nazi concentration camp when, during World War II, he never left the Hollywood back-lots).

As for Putin, who was a real-life KGB agent, one or more characters like him appeared in the movie. Given what we know about him and his ego, e.g., in his 60s still playing hockey (good for him) and scoring a lot (what, you say the defense and the goal-tender on the other team ease up on him?), he may well fancy himself as an actor too, and would just love to play one of those roles (in a movie in which, of course, the Soviet Union/Russia would come out on top).

Turning to the more serious side of this narrative, as is very well-known there is considerable controversy over the following issues. Not necessarily in order of importance: did the Russians somehow interfere with the U.S. electoral process in 2016? If so, did they ally themselves with Trumpian interests? If so, did one or more Trump agents/representatives collude with the Russians in doing so? Despite his blanket denials, does Trump have business interests in Russia and/or do one or more of the Russian robber-baron-capitalists otherwise known as the oligarchs have investments with President Trump, in Russia and/or elsewhere? How many more high-level Trump appointees are going to get caught up in the mess, before it possibly reaches Trump himself? And so on and so forth.

Now, there is massive controversy over the issues laid out briefly above and many other related ones. There are numerous folks on the Left, including several close friends of mine, who are convinced that the whole Russia-interfered-with-the-election thing was/is an effort by what is called the "Deep State," centered on the U.S. intelligence agencies, to one way or another remove Trump from office. Why? Because he is too friendly with Russia. Indeed, Trump has criticized all sorts of foreign leaders, governments, and organizations, like NATO, the European Union, Mexico, Angela Merkel, China, the Australian Prime Minister (if hanging up on a foreign leader in the midst of a phone conversation can be considered criticism), to name a few. But he has yet to go after President Putin, or Russia. So, what is going on here?

Well, to repeat, Russia may or may not have interfered in the U.S. 2016 election. If they did, they may or may not have colluded with the Trumpites in doing so. Trump may or may not have personal investments in Russia, although Trump Jr. has said that he has or had. Much information could be gleaned from the now-legendary Trump tax returns, but it is by now obvious that he will never voluntarily release them. (Could there be a VERY well-covered up leak of at least some of what is massive documentation at the IRS as the Trump budget begins to cut into the staff at that agency? Well, yes, but that's another story.) And etc., etc., etc. Investigations seem to be coming up, at various levels of seriousness and intensity, about the particulars or the lack thereof of Trumpian involvements with Russia/Putin and the latter's possible interference in the 2016 election. But what's really important is not Trump and the Russians. It is the relationship between U.S. ruling class, that stands behind and in many ways runs the "Deep State," and the Russians that matters.

Let's take a brief look at some recent history. Since the demise of the Soviet Union at the end of The 75-Years War Against the Soviet Union in the early 1990s the United States has been on a sometimes desperate search for a reason or reasons to maintain the country on a war footing at least insofar as the Military-Industrial Complex is concerned. In fact, in my view, the primary motivation for the War on Iraq was to create a state of Permanent War for the U.S. But then, Iraq came to an end, for U.S. troops, that is. And with the lack of a ground war, the Permanent War campaign wasn't working too well, until along came the Ukraine crisis.

This was artificially created by Victoria Nuland, et al, back in 2014 with the overthrow of the quite corrupt but sort-of pro-Russian government, and its replacement by a frankly pro-Western one. It is fascinating that for the bulk of the Western media, modern Ukrainian history begins the day after the coup. At any rate, then quickly came the annexation of Crimea by Russia, primarily for the very justifiable reason of protecting its sole warm-water port there, at Sevastopol, previously under a very cancellable lease to the Ukrainian government.

Then also came various military actions, with various levels of Russian involvement, or not, to protect the Russian-speakers living in Crimea and several other Eastern Ukrainian provinces from well-announced, planned depredations on them from the new government in Kiev. It includes descendants of the Ukrainian fascists who fought on the Nazi side in World War II. And then came the Sanctions, and the particular creation, under Hillary Clinton and the Obama Administration, of Russia-as-the-enemy. And now, very quickly, we get to now.

The U.S. Military Industrial Complex (USMIC) is by far-and-away the largest in the world. The increase in military spending just proposed by Trump alone equals about 80% of the Russian total. The U.S. military budget is greater than that of the next seven largest national expenditures combined. The Trump increases will make the spending gap even larger. The maintenance of the USMIC is critical to the interests of the U.S. ruling class, for it acts as a highly profitable ongoing economic stimulus from the Federal government. So, one segment of the U.S ruling class definitely wants to maintain the sanctions and wants to continually build up the image of Russia-as-the-bugaboo that is going to invade the Baltic countries any minute (nonsense[!]).

Of the three candidates for "permanent enemy" status, Russia clearly comes in ahead of the two others, China and Iran. China is too big, too powerful economically, and militarily in the Western Pacific, too important a trading partner for the U.S. and the many companies that depend on it for cheap, high-quality, manufacturing, and holds too much U.S. debt. Iran makes lots of noise and is strategically located, but is really too small for ongoing casting in the role.

Generally, the military folk in Trump regime definitely want to pursue the Russia-is-the-enemy course, as does Nikki Haley over at the United Nations (and who knew that this would happen? Trump, when he appointed her? Unlikely.) On the other hand, there is the fossil-fuel ruling class segment that wants to end the sanctions so that it can pursue, at the very least the vast reserves that lie in the Russian Sector of the Arctic Ocean. They are represented in the Trump regime by Exxon-Mobil's Rex Tillerson at State, of course (although one hears virtually nothing from him these days).

So regardless of what is going on with the "Russia Connection," whether it really exists, and whether or not Trump himself has significant financial ties with various Russians, the real conflict within the Trump regime is between the USMIC guys, led by General Mattis at Defense, and the drop-the-sanctions-and-let's-get-on-with-it guys at State. And then further, the real aim of the latter, and Trump himself, may well be to gain some significant hold on some segment of the Russian economy.

Steven Jonas, MD, MPH, MS is a Professor Emeritus of Preventive Medicine at StonyBrookMedicine (NY) and author/co-author/editor/co-editor of over 35 books. In addition to his position on OpEdNews as a "Trusted Author," he is a Senior Editor, (more...)
Related Topic(s): Russia And Us Conflict; Russian Influence; Sanctions, Add Tags
Add to My Group(s)
Go To Commenting
The views expressed herein are the sole responsibility of the author and do not necessarily reflect those of this website or its editors.