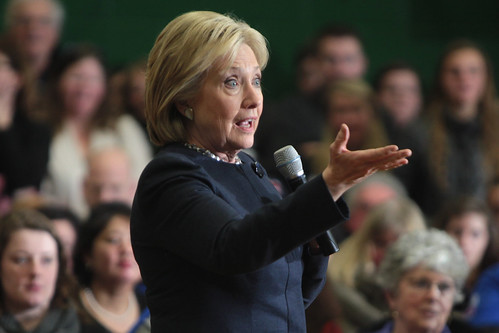 The Clinton campaign has now spent months trying to convince relatively obscure former Republican officials to endorse her campaign while also adopting many Republican slogans and arguments in her quest for the presidency.

One has to wonder how much long term damage she is doing to progressive policies by deploying this strategy, even if she beats Donald Trump along the way.

Clinton gave a speech in Ohio on Wednesday with yet another former Bush official, James Clad. The speech was billed as touting "American exceptionalism," one of the more repellent nationalistic concepts that Republicans have used to shame progressives in the past. She spoke mostly about foreign policy, a subject in which Clinton -- with her penchant for supporting foreign wars and beefed up US military presence everywhere -- seemingly has more in common with mainstream Republicans than the Obama administration.

Last week, Clinton again handed legitimacy to the Republican party through the way she has decided to attack Trump. She gave a speech in which she praised prior GOP candidates for their treatment of Muslim Americans, including George W Bush, in an attempt to rhetorically separate Trump from these other supposedly upstanding Republicans. In the process, she is kneecapping Democratic candidates around the country who are attempting to retake the House and Senate.

Instead of hanging Trump around all Republicans' necks, she is cleaving him off from other GOP candidates and giving them an easy out, despite the fact that Trump is a direct product of the GOP's pandering to classist and racist elements of society for a decade. (Leaked Democratic National Committee emails show that at least some Democrats were worried about this exact scenario.)

Whether Clinton's strategy of trying to peel off a small percentage of Republicans to win the presidency will actually work remains to be seen. There seems to be scant evidence in the polls that a significant amount of Republicans will support her; Clinton's advantage mostly stems from the fact that black and Hispanic Americans understandably oppose Trump in historic numbers. But if the strategy hinders Democrats from retaking Congress, the damage is going to be seen for years.

Related Topic(s): Clinton Campaign; Ethics; Hillary Clinton; Republican Defection, Add Tags
Add to My Group(s)
Go To Commenting
The views expressed herein are the sole responsibility of the author and do not necessarily reflect those of this website or its editors.