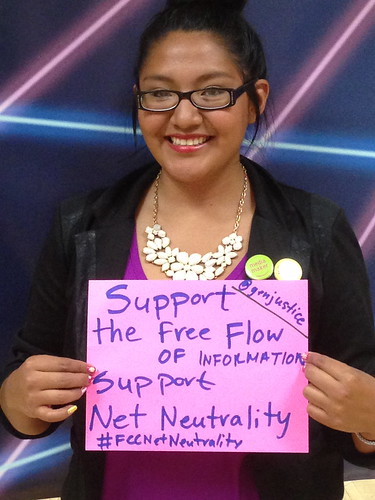 LEADING CIVIL RIGHTS groups who for many years have been heavily bankrolled by the telecom industry are signaling their support for Donald Trump's promised rollback of the Obama administration's net neutrality rules, which prevent internet service providers from prioritizing some content providers over others.

The Obama administration's Federal Communications Commission established net neutrality by reclassifying high-speed internet as a regulated phone-like telecommunications service, as opposed to a mostly unregulated information service. The re-classification was cheered by advocates for a free and open internet.

But now Trump's new FCC Chairman Ajit Pai, a former Verizon attorney, is pushing to repeal the net neutrality reform by rolling back that re-classification -- and he's getting help not only from a legion of telecom lobbyists, but from civil rights groups.

In a little-noticed joint letter released last week, the NAACP, Asian Americans Advancing Justice, OCA (formerly known as the Organization for Chinese Americans), the National Urban League, and other civil rights organizations sharply criticized the "jurisdictional and classification problems that plagued the last FCC" -- a reference to the legal mechanism used by the Obama administration to accomplish net neutrality.

Instead of classifying broadband as a public utility, the letter states, open internet rules should be written by statute. What does that mean? It means the Republican-led Congress should take control of the process -- the precise approach that is favored by industry.

None of the civil rights groups that signed the joint letter responded to a request for comment.

It's not the first time civil rights group have engaged in lobbying debates seemingly unrelated to their core missions, but in favor of their corporate donors. At a time when OCA received major funding from Southwest Airlines, the group filed a regulatory letter on behalf of the airline in support of Southwest's bid to open flights at Houston airport. The NAACP, after receiving financial backing from Wal-Mart, helped the retail chain during its contentious bid to open stores in New York City.

Telecom issues, however, are a particular specialty. Last week's letter was organized by the Multicultural Media, Telecom & Internet Council (MMTC), a group funded by the telecom industry that has previously encouraged civil rights groups to oppose net neutrality. MMTC in previous years reported receiving about a third of its budget from industry-sponsored events; its annual summit, which was held last week, was made possible by $100,000 sponsorships from Comcast and AT&T, as well as a $75,000 sponsorships from Charter Communications and Verizon.

read the rest of the article at theintercept.com

LEE FANG  Lee Fang is a  reporting fellow with The Investigative Fund at The Nation Institute. He covers money in politics, conservative movements and lobbying. Lee's work has resulted in multiple calls for hearings in Congress and the (more...)
Related Topic(s): NAACP; Net Neutrality; Net Neutrality, Add Tags
Add to My Group(s)
Go To Commenting
The views expressed herein are the sole responsibility of the author and do not necessarily reflect those of this website or its editors.