Why do top Republicans want paper proof of citizenship to vote? Because lots of blue voters don't have it. 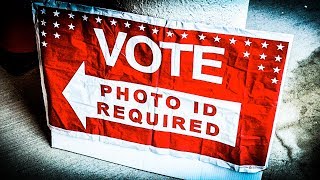 The GOP Is Destroying Your Right To Vote And You Don't Even Know It
(Image by YouTube, Channel: The Majority Report with Sam Seder)   Details   DMCA

Civil rights advocates have raised alarms because the Department of Justice has asked the U.S. Census to include a question about citizenship in its 2020 national survey. But the way the Trump administration has framed this request also shows it's poised to make proof of citizenship the latest voter suppression tool.

As many civil rights groups have noted, asking immigrant families to disclose undocumented relatives will push people to evade Census takers or simply lie, causing an undercount and diverting federal funds away from locales with immigrant populations.

"The Justice Department's untimely and unnecessary request to the U.S. Census Bureau to add a question to the 2020 Census would destroy any chance for an accurate count," said Vanita Gupta, president and CEO of the Leadership Conference on Civil and Human Rights. Gupta noted that the Justice Department justified its request by saying it was needed to enforce voting rights.

"The Justice Department has never needed to add this new question to the decennial census to enforce the Voting Rights Act before," Gupta said. "Contrary to the Justice Department's letter, the Census Bureau has not included a citizenship question on the modern census 'short form,' sent to every household, since enactment of the Voting Rights Act in 1965."

The DOJ's mid-December letter requesting the citizenship question is the latest anti-immigrant development from the Trump administration, but it also underscores that the DOJ's Voting Rights Section is now being run by right-wing Republicans who are known for wanting otherwise eligible voters to present paper proof of citizenship to register -- which some key blue constituencies lack.

Attorney General Jeff Sessions comes from one of a handful of states that require would-be voters to produce paper proof of citizenship to register to vote in state elections. To vote in federal elections, they can simply sign an oath at the bottom of the federal registration form. Kansas Secretary of State Kris Kobach, who heads Trump's so-called Election Integrity Commission, has made this separate and unequal standard a personal crusade. He and his allies, including those in the DOJ who are pushing the Census to ask about citizenship, are ignoring that every person who registers must declare they are a citizen and that their signature is a sworn legal oath.

(Editor's note: Late on Wednesday, Trump disbanded this commission, a victory for pro-voting advocates who criticized its secrecy, voter suppression agenda and illegal handling of public records. However, Kobach commented he will pursue its goals through the Department of Homeland Security, which has jurisdiction over citizenship.)

Why would Republicans focus on proof of citizenship in order to vote? Because, as the Brennan Center for Justice at NYU School of Law reported in 2006 and updated in a report last summer, an estimated 7 percent of eligible voters don't have such documentation--typically a birth certificate or passport. In other words, adding proof of citizenship to register will reduce participation in elections. (Think of it as a barrier at the starting line of the process, just as stricter state voter ID requirements is a barrier at the finish line.)

"A nationwide survey by the Brennan Center in November 2006 found that 7 percent of the citizen voting age population, or 13 million people, did not possess documents that would prove their citizenship," the Center's July 2017 report said. "The rate is twice as high among citizens earning less than $25,000 per year. Women who changed their name upon getting married are especially likely to lack the relevant documents: A third of voting-age women don't have proof of citizenship that reﬂects their current name."

That 7 percent figure hasn't changed in the past decade, the 2017 report by senior counsel Ian Vandewalker said. "In fact, national studies show that between 5 and 7 percent of Americans don't have any documents to prove their citizenship. Birth certiﬁcates are frequently lost or destroyed. The most recent State Department statistics indicate that 59 percent of Americans don't have passports."

Seen narrowly, the Justice Department's 11th-hour request to add a citizenship question to the next Census is a disruptive anti-immigrant action, because it will likely lead to undercounts that will deprive states and cities of funds for their migrant populations. But seen broadly, it signals the Department's Voting Section has a selective enforcement agenda with deep partisan implications.

"A study by the Center on Budget and Policy Priorities in September 2006 reached substantially the same conclusion [as Brennan]: Almost 6 percent of adults born in the United States don't have access to a passport or birth certiﬁcate -- around 11 million people," Vandewalker's report said. "The study found that certain groups are especially likely to lack the documents: low-income citizens, the elderly, African Americans, and citizens from rural communities."

The electoral implications are clear. If you add suburban women who in 2017 voted for Democrats instead of Republicans to the demographic groups cited by CBPP and Brennan for lacking citizenship documentation, you have much the same populations that elected Doug Jones to the Senate from Alabama and created a virtual tie in Virginia's 2017 House of Delegates. If the GOP can block these otherwise eligible voters, its odds of retaining office grow much higher. You can be sure Republicans know this, and will let no chance slip by to normalize seeking proof of citizenship.

Today, the tip of this iceberg surfaced in seeking questions for the 2020 Census. In the near future, this issue will arise in red states seeking to further police the registration process. Don't be surprised when this tactic resurfaces in 2018 and beyond.

Steven Rosenfeld  covers democracy issues for AlterNet. He is a longtime print and broadcast journalist and has reported for National Public Radio, Monitor Radio, Marketplace,  TomPaine.com  and many newspapers. (more...)
Related Topic(s): Census; Republican; Rights; Trumpism; Undocumented; Vote Suppression; Voter Disenfranchisement, Add Tags
Add to My Group(s)
Go To Commenting
The views expressed herein are the sole responsibility of the author and do not necessarily reflect those of this website or its editors.