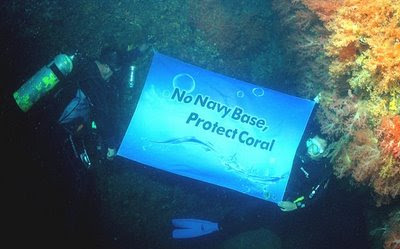 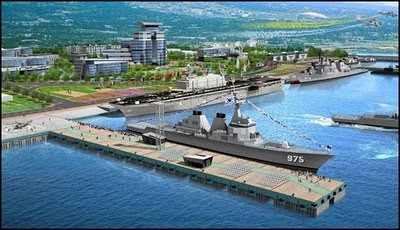 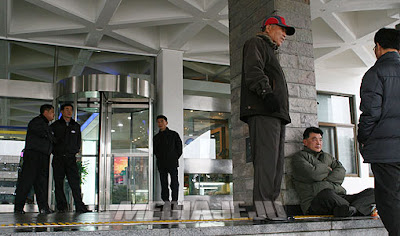 (Image by Unknown Owner)   Details   DMCA
Mayor Kang Dong-Kyun from the Gangjeong village sits overnight in the cold outside government building in protest of Navy base plan
I try not to visit a place and then forget about the people and the struggle they are engaged in. Since my visit to Jeju Island, and the Gangjeong village last October, I have been closely following developments about the South Korean government's plan to build a Navy base where pristine coral reefs, fishing, and tangerine groves are now integral to the people's way of life.
The base construction is soon set to begin in Gangjeong. The villagers are currently setting up a tent camp along the rocky shore line where the Navy intends to pour concrete to cover the rocks and tiny marine life to make their wharfs where the Aegis destroyers will be homeported. The ships, from the South Korean and US fleets, are outfitted with "missile defense" systems and will surely be used to continue surrounding China's coastal region. Jeju Island, now called the peace island, will thus become a prime military target.
The coral reefs have been named by the United Nations as key environmental treasures that should be saved. Building a naval base on top of these wonders of nature will not ensure they will be protected. The traditional way of life in this small fishing and fruit growing community will be severly impacted.
Last night the mayor of Gangjeong, Kang Dong-Kyun, spent the whole night sitting in the cold outside the Jeju government building in protest of the decision to go forward with the construction of the base. When I visited his town Mayor Kang carefully showed our delegation around the site for the proposed base and took us out to dinner at a local restaurant. He spent this time with us because he hoped that it would translate into more people knowing about the Navy base fight and hoped that support would build across South Korea and beyond to help stop these deadly plans.
As I now hear about their protest heating up, as they prepare to face the bulldozers of destruction, my heart goes out to them. I wish I could join them in sitting in protest against this base. This Navy base will have a direct negative impact on our work to restrain US military expansion in the region and will ultimately provoke more conflict with China .
With that in mind I now intend to compile a list of organizations and concerned individuals from around the world who wish to voice their protest with the US and South Korean governments against this Navy base. If you would like to be listed on this letter please send me your name, group name, and your city/state or country. Write me at globalnet@mindspring.com
It is the least we can do.

Related Topic(s): Military; Nature; Navy; Peace; Peace; Protest, Add Tags
Add to My Group(s)
Go To Commenting
The views expressed herein are the sole responsibility of the author and do not necessarily reflect those of this website or its editors.