(According to the ballots that can be verified anyway) 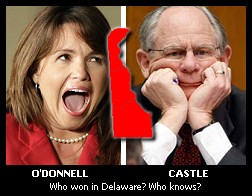 Yesterday's hotly contest race for the GOP's U.S. Senate nomination in Delaware ended in victory for the state's moderate, much-beloved former Governor and nine-term U.S. Congressman Mike Castle -- at least according to the tabulation of ballots cast in the race which can actually be verified by anybody as having been recorded accurately as per the voters' intent.

From the State of Delaware's Elections website with 100% reporting:

Nonetheless, the Tea-Party/Palin/DeMint-endorsed Christine O'Donnell, who was getting trounced by the popular Castle in pre-election polls until only recently after losing twice before in her quest for a U.S. Senate seat, was declared the "winner" of yesterday's race and -- as The BRAD BLOG detailed yesterday -- nobody can prove whether the voters of Delaware actually selected her or not.

Appropriately enough for the far Rightwinger, the "victory" was 100% faith-based, since it's strictly impossible to know if even one citizen's vote cast yesterday on the 100% unverifiable e-voting machines Delware forces voters to use on Election Day was recorded accurately...

That said, while we've seen examples of similar disparities between paper-based absentee results and electronically cast results before (the unknown Alvin Greene's "victory" over Judge Vic Rawl in South Carolina's recent Democratic U.S. Senate primary comes to mind) there are logical-ish reasons --- as there always are, in every election --- to justify O'Donnell's computer-reported "victory" yesterday.

As we noted in response to a reader in comments on yesterday's Delaware item, O'Donnell received a late endorsement from Sarah Palin on September 9th, just 5 days before the election. That brought with it a surge of last-minute support from the "Tea Party" and others.

Those factors, and certainly others, could certainly explain the nearly-reversed percentages as reportedly cast on Election Day on the e-voting systems, versus those seen on the paper-based, human-countable absentee ballots.

But the point here is: Who knows? Absolutely nobody does. I don't. You don't. O'Donnell doesn't. Castle doesn't. The State of Delaware doesn't. Even the manufacturer of the e-voting system, Danaher/Guardian, would be unable to prove who actually won or lost the race one way or another.

As we've spent years detailing, this continues to be no way to run a representative democracy based on self-governance. But we continue to do it anyway despite years of documented, scientific evidence proving being a shadow of a doubt that it's both insane and antithetical to the representative democracy and self-governance we pretend to have. It's also a disgrace and a horrible example for the rest of the world which used to look to this nation as a beacon of democracy.

While the Republican establishment is beside itself after last night's reported results (Castle, who they'd supported, was thought to be an easy win over Democratic nominee Chris Coons, while polls currently show O'Donnell getting trounced by him), the same 100% unverifiable e-voting systems will be used again in Delaware (and 20% of the rest of the nation) on Election Day on November 2nd this year. If O'Donnell loses the general election -- or wins -- there will be no way to prove that she did -- or didn't.

"Tea Partiers" who support O'Donnell, and who claim to give a damn about representative democracy and self-governance, would be wise to finally start taking notice of the real threats to our supposedly inalienable right of self-rule. HINT: The threat ain't ACORN.

Brad Friedman publishes Bradblog.com
Related Topic(s): Castle-Michael; Christine O-donnell; Republican; Teabaggers, Add Tags
Add to My Group(s)
Go To Commenting
The views expressed herein are the sole responsibility of the author and do not necessarily reflect those of this website or its editors.