My mother was diagnosed with neuroendocrine cancer in December of 2016 which was surgically removed in February of 2017. In March of 2018 two spots showed up on her pancreas from her routine scan. She was informed that there was no treatment available in the United States for the type of cancer she has. This happened as I was graduating from Columbia University with a MA in English education. 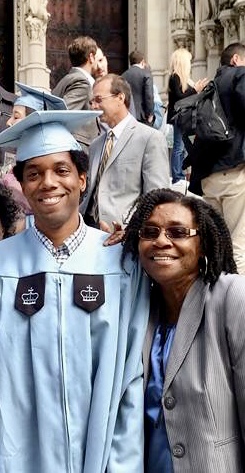 My mother´s doctor suggested that she go to an European Union country for treatment. As her son was already living in Spain, she asked if she could stay with me while she underwent treatment and of course I said yes.

We arrived here in October of 2018 and my mom paid out of pocket for her various medical treatments. She has slightly improved but her doctor felt she could be better treated at the public hospital. My mom has finally been approved for healthcare at the public hospital but we have ongoing transportation costs, debts associated with her care at the private hospital that need to be paid, and basic costs associated with the care of a cancer patient in another nation.

My mom is getting better, and is finally under the care of research doctors who are experts in treating rare forms of cancer. It´s time consuming, as I´ve had to take her to appointments as much as three times a week. We live far from the hospital,so we have to take a bus to the city center and take a cab, or we have to take a cab to the train, and then the train to another cab.

As a single parent my mother wanted to make sure she was able to take care of me. So she got a job at a power plant and raised me on it and put me through college. Unfortunately she was exposed to asbestos, coal dust, and other hazardous cancer causing materials.

My mother did shift work, where she would work long hours during the day one week, long hours evenings the next week, and long hours at the following week, only to have to switch to days again. Several of her coworkers have already died from cancer, and others have other major health issues due to absestos and working such horrible hours.

She supplemented her income while I was in college by selling herbs and multivitamins through multilevel marketing when I was a college student. She had developed an interest in health and met a number of interesting people while doing multilevel marketing.

My mother volunteered with the University of Alabama, at Birmingham, for the breast cancer. Her volunteer work was on the disparity of healthcare among African American women. Due to healthcare disparities and a lack of knowledge within African American communities in rural Alabama many did not get tested early, and by the time their cancers were diagnosed it was much harder to deal with. The program spearheaded workshops and provided transportation for these poor rural women to get mammograms.

My stepfather is back in the states, as he had to stay behind to maintain the bills on the house. But he and my mother miss each other. She would like to be well so she can return to my stepfather. He has been very encouraging and supportive, and despite missing her as told her to stay here as long as it takes in order to recover and get good health.

My mother has her three siblings and a father who died of cancer, and her doctors think there maybe a genetic factor so they have done genetic testing. We await these results. My mother also misses her friends and the rest of her family.

Your donations and prayers will be greatly appreciated. Thank you so much for your time and consideration.

Related Topic(s): 2018; Asbestos; Cancer; Cancer; Cancer Treatment Centers Of America; Donations; Health; Health; Hospital; Medical; (more...) Mother; Motherhood; Motherhood; Pancreas; Prayers, Add Tags  (less...)
Add to My Group(s)
Go To Commenting
The views expressed herein are the sole responsibility of the author and do not necessarily reflect those of this website or its editors.

Ghana's Right to Return Law for the Descendants of African Slaves

Occupy Wall Street's Founders and Take Ownership of the Movement

The Degeneration of Occupy Wall Street Into A Charity